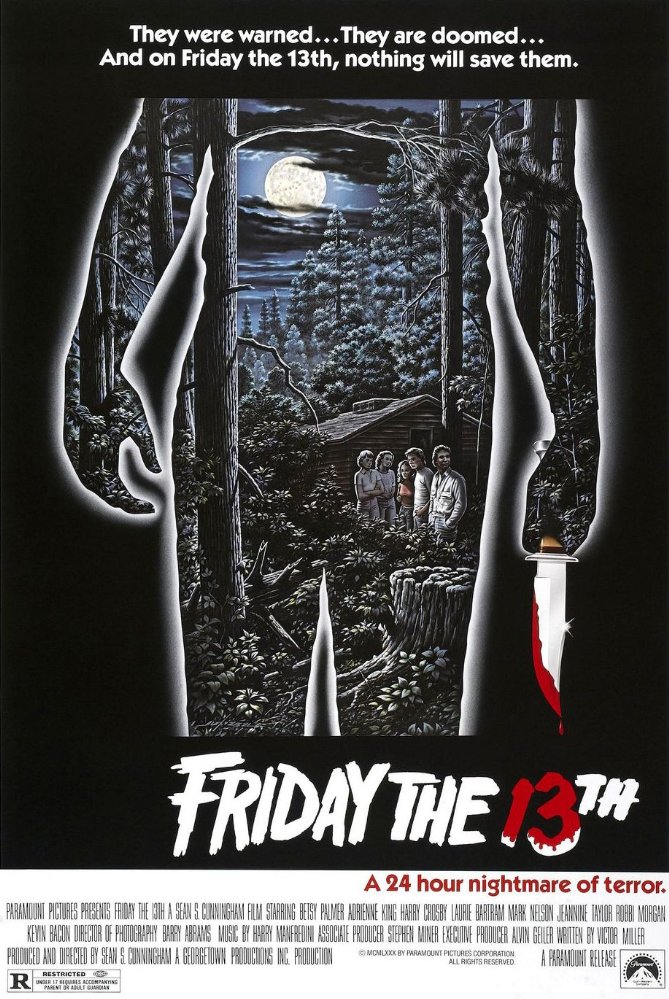 Plot: When a young boy drowns in a lake due to his camp counselors not supervising him, revenge is taken. The question is, who is taking the revenge?

Gory shocker that is well acted, directed with excellent special effects by Tom Savini. Betsy Palmer is outstanding in the last part of this film.

Betsy Palmer kills! This first in series is my favorite of the bunch. It just got too far out for me to get involved as the series progressed.

now as much as i really wanted to love this film,it was just too hard.now it would be unfair for me to just write about how bad the acting , dialogue is.so I'm gonna just leave you off by saying this film doesn't have the classic spin written all over it like horror films "nightmare on elm street" , "halloween" have.I really do want to love this movie,but I found myself bored and sighing.I couldn't wait for it to end.if i was to see this film back in 1980 when it came out,I would have dug this film like no other.people call this film a HORROR CLASSIC.it's fun , it's shocking , but it's not a classic.I really do hate to smash on this film,but it didn't leave me with a smile at the end when the credits rolled like "nightmare on elm street" did for me with it's brilliance. it's fun , …

"Friday The 13th" by Yojimbo

A group of young students arrive at Camp Crystal Lake and are picked off one by one by an unseen killer. The original Friday The 13th was an unashamed cash in on the success of Halloween and it's odd how the franchises became a kind of arms race of idiocy as each sequel became more and more absurd and outlandish as they tried to outdo each other. Neither killer from the original films were supernatural or indestructible as their sequels suggested, each really just very human, homicidal nutjobs. But whereas Halloween had John Carpenter's directorial skill and Donald Pleasance's character to add an interesting dynamic to the equation, Friday The 13th is just an excuse to get some obnoxious teens into various states of undress while a cameraman lurks behind trees/by windows etc etc. The …

In 1958 Camp Crystal Lake a couple gets murdered mysteriously. It then cuts to Friday to 13th present day. Annie (Robbi Morgan) hitchhikes to Crystal Lake and is advised by a truck driver for the lake being cursed. A girl gets slit on the neck in the woods. A group of friends enjoy the lake namely Alice (Adrienne King), Bill (Harry Crosby), Marcie (Jeannine Taylor), Jack (Kevin Bacon), Brenda (Laurie Bartram), and Ned (Mark Nelson). A police officer named Dorf searches for Ralph with the group. More people get killed without disclosing the killer.

The score sounds eerily familiar, much like Jaws and Psycho with a touch of echo for more spookiness. So many surprising scenes with beautiful cinematography and authentic performances around. Betsy Palmer really did a great job in …

My Friday the 13th Movie Rankings by The WHB

No posts have been made on this movie yet. Be the first to start talking about Friday the 13th!