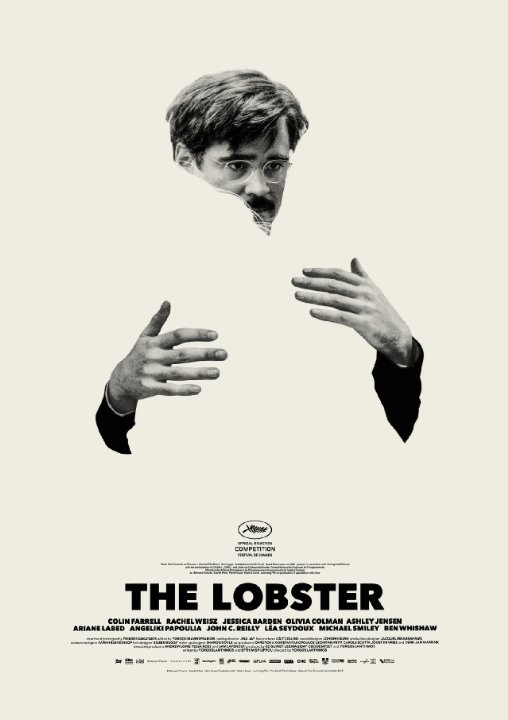 Plot: In a dystopian future, the laws of The City dictate that anyone who is single must enter The Hotel and, if withing 45 days they cannot find a partner to connect with, are turned into beasts and sent off into The Woods. -- Chris Kavan

"The Lobster" kept making me wonder, "what message is this trying to convey?" By the time it was over, I felt as though it said a lot about nothing, and answered very little.

One of the year's most daring scripts, The lobster is set in a world where finding a companion is enforced by law, or else you're transformed into an animal. Starring Colin Farrell in a role that demanded he turn off all his natural charm to play a man desperate to find connection in a world that alternately mandated it or forbid it

Audacious, bold, overwhelmingly bleak with a streak of very black humor running through. Much like Yorgos Lanthimos earlier Dogtooth - this is not going to be a general crowd-pleasing film, but it is entirely unique and exceptional, even if the pacing can be a bit slow. This is biting satire wrapped in a grim future with weirdly unlikable yet unforgettable characters. If you want something different, The Lobster will fulfill your wish.

'The Lobster' is one of the most original films I've seen at the cinema. Based on the premise alone, this weird tale intrigues. But the weirdness doesn't stop there. The presentation, performances, and tone are far removed from any kind of reality. Yet, the characters and their ambitions for love still come through in a bizarrely relatable way. Only in a surface sense. You can easily see the true meanings behind the facade of lunacy. The business of the hotel represents the societal pressure of conforming to committed relationships. Their rules of romantic engagement and governing viewpoints enforce a strict mentality; that of which being in a committed relationship is far superior to being single, no matter the lack of actual romance. It's a harsh point that is made all the …

Loner Leader: "We dance alone. That's why we only play electronic music".

The Lobster takes place in a dystopian near future, single people, according to the laws of The City, are taken to The Hotel, where they are obliged to find a romantic partner in forty-five days or are transformed into beasts and sent off into The Woods.

The Lobster is a film that's both strange and completely bizarre, but rather brilliant as well. It's one of those movies that's so different with it's story and visuals that it's quite intriguing to watch. The cinematography was tremendous and the movie isn't predicable, as many times it takes a different turn for the best. Yorgos Lanthimos knows what he's doing and I can tell what he was going for when it came to the self aware moments. Every choice …

No posts have been made on this movie yet. Be the first to start talking about The Lobster!