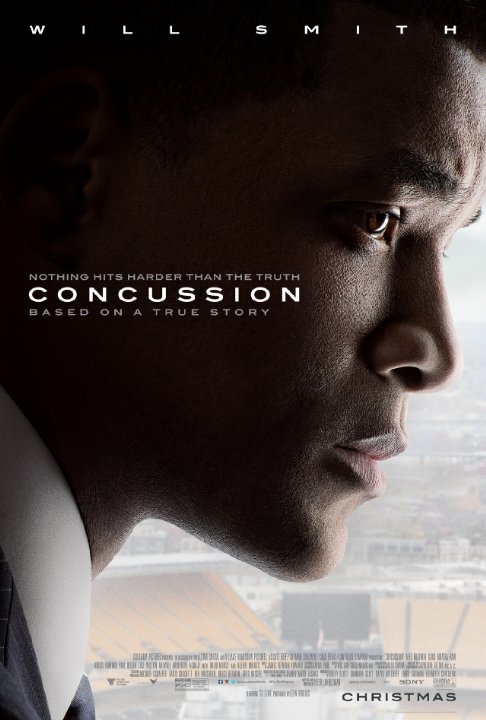 Plot: Based on the true story of Dr. Bennet Omalu - a to[p forensic neuropathologist who discovered CTE, a football-related brain trauma, and took on one of the most powerful organizations in an epic David vs. Goliath battle for the truth and reparations to those who suffered from the effects. -- Chris Kavan

Almost the entire first half of "Concussion" does little more than state the obvious, but it makes a quick recovery in the second, even though it it still doesn't cut very deep.

"The NFL owns a day of the week. The same day the Church used to own. Now it's theirs."

You can hardly say "Concussion" is a swirling, action-packed film. The movie tells (in a painfully slow pace) the true story of Dr. Bennet Omalu (Will Smith), a Nigerian pathologist who discovers the existence of CTE (chronic traumatic encephalopathy). A brain trauma athletes of certain sports (mostly body contact sports) could get. Like top players of the NFL. This because they have to endure huge blows on their heads, countless times during their careers. In other words, their brains are slowly beaten to pulp. The end result is that these players inevitably change into aggressive, half-crazed hopeless cases, tormented by hallucinations, inner voices and a splitting headache (just to name a few …

'Concussion' paints the NFL a new color. The corporate branding money making giant is shown as... just that. The great lengths that the NFL reaches in order to cover up this newfound illness related to injuries sustained by their players is almost all true. It's quite sad that a sport-turned-corporation wouldn't be interested in the safety of it's players. The findings of Dr. Bennet have been well known, yet not much in change has taken place. This is the one area that makes 'Concussion' compelling. The only problem is that the movie only digs as deep as what I've just explained (except with more description). Often times we get sidelined by scenes of his personal life and it detracts from the main issue at hand. This is still a decent drama with an immersive performance from …

No posts have been made on this movie yet. Be the first to start talking about Concussion!