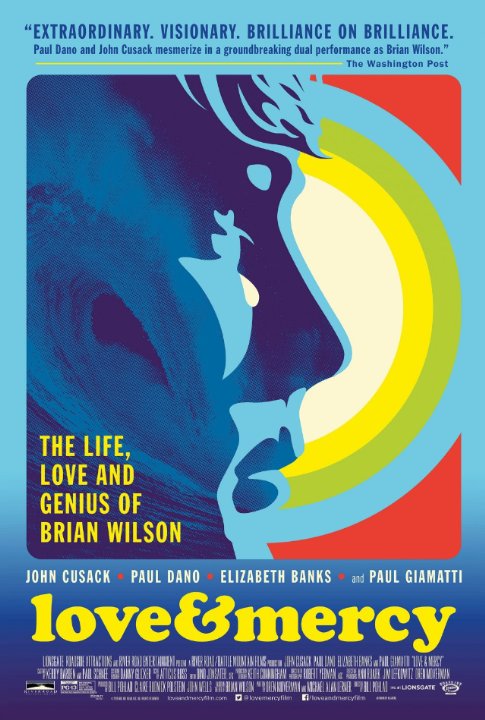 Plot: Follows the life of reclusive "Beach Boy' Brian Wilson - from he early years as an influential musician, through his nervous breakdown and relationship with controversial therapist Dr. Eugene Landy and redemption with his wife Melinda. -- Chris Kavan

I went into this movie with little to no knowledge about the life and career of Brian Wilson, but I'm very glad I watched it. "Love & Mercy" is a powerful visionary of a film with both substance and style.

This is one of the best depictions of the music-making process I've seen and it's a sweet, compelling story about mental illness too. Click on the link if you want to read the review with still from the film.

The great and tormented Norwegian painter Edvard Munch, best known for painting The Scream in 1893, had this to say about the role of suffering in art: âArt grows from joy and sorrow. But mostly from sorrow.â For as long as human beings have had culture and self-expression, some of its most vivid and impassioned works of art have been born out of strife, self-hatred, anxiety, and grief. There is a positive angle to this truth, insofar as art gives our pain a voice and a channel for release. Humanityâs ability to creatively funnel its …

Sometimes I am Very Sad...

I'm not saying this was a bad movie, per-say, but, it just wasn't quite what I was expecting. The scenes from the 60's were great. Paul Dano should have been nominated for an Oscar for his portrayal of a young Brian Wilson. The scenes showing the making of Pet Sounds was fascinating. But, the John Cusack scenes kind of go off the rails. It's not that Cusack is bad, he's not, in fact he's rather good, but I just couldn't help but "see" "John Cusack" and not "Brian Wilson." It's the same fate that both Joaquin Phoenix and especially Reese Witherspoon had with Walk the Line (2005), they were two beautiful people who just couldn't shake who they were and "become" the character that they were suppose to play. Jamie Foxx in Ray, on the other hand, nailed it, I "saw" Ray Charles on the screen, …

'Love & Mercy' is one of the best biopics I've seen. It doesn't follow the usual genre format. The story goes back and forth between two different time periods, each being their own contained narrative of the same character, and each connecting with the other. This format allows for a very specific kind of character study. The result is deep and genuinely emotional. Everything flows together with natural ease thanks to terrific directing and acting. Dano and Cusack are both immersive. They are easily believable as being different sides of the same person. This adds strong investment in Wilson's struggles, leading to a perfectly satisfying finale. But my favorite aspect is the accurate look into Wilson's songwriting process, including his methods in the recording studio. These …

No posts have been made on this movie yet. Be the first to start talking about Love & Mercy!