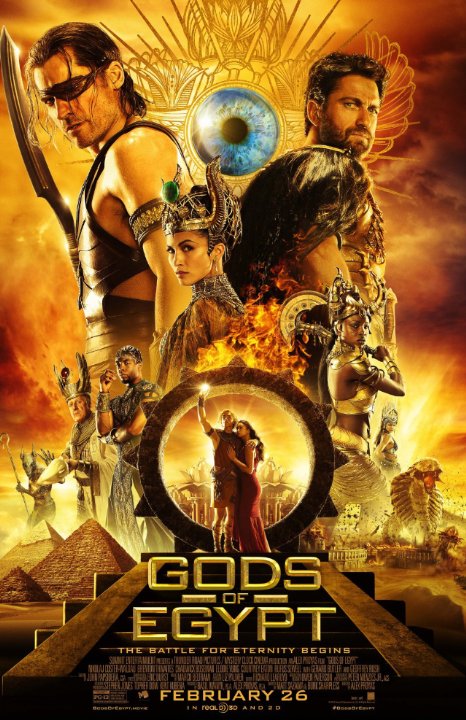 Plot: Set, the god of darkness, has taken the throne of Egypt for his own and the country finds itself torn asunder by chaos and conflict. Few dare challenge him but a young thief, who lost the love of his life to the merciless god, joins forces with Horus hoping to finally unseat Set and rescue his beloved. -- Chris Kavan

All visuals and no narrative heft, "Gods of Egypt" is the latest Hollywood un-epic involving mythology.

Gods of Egypt was a disaster that we all predicted just by the first trailer. While it isn't the movie ever made, because lets be honest here, we all have seen much worse. The effect's looked unfinished, Gerard Butler was way too over the top and Alex Proyas is slowing becoming a hack.

Alex Proyas, what happened to you?

GODS OF EGYPT is one of those bad movies that comes around once once in a while.
Overblown in every sense of the word and it doesn't hide the poor script, cheesy effects, and strangely off kilter performances from most of the cast. It's almost like a game to determine which actor knows they're in a bad movie or not. For a two hour feature film, the dialogue is and pacing is rushed to the point some characters don't seem to catch a breathe between saying their lines.
From a visual standpoint, the movie's reported budget of $140 million does not look good; the 1999 Mummy remake had better CGI and it's almost twenty years old. Still, the visual palette is bright and colorful instead of dark and dreary for a change.
GODS OF EGYPT certainly isn't a good movie but to its credit, it does …

"A gift from someone with great assets, and someone with very few. But when both die and are at the Final Gate... What is its value? I say we are equal."

I thought this would be something similar like "Exodus: Gods and Kings". A historical story set in Egypt with immense scenery's and an abundance of special effects. Well, it certainly is situated in Egypt. And the bag of tricks, full of kitsch and console-game-like special effects were exploited to the utmost. Only, now it's not about a biblical figure but the mythological world of Egypt. Ancient Egypt where people and gods live alongside each other. It sometimes resembled "Gulliver's Travels" since all those gods of Egypt have an imposing figure compared to the ordinary mortals. Ultimately, it's a kind of historical "Transformers". …

Is This a Game or a Movie? The Gods Must Be Crazy

I was pretty much expecting Gods of Egypt to disappoint based on the trailers alone. While the film relies way too much on CGI wizardry, I admit is wasn't quite as bad as I expected. Still, when a movie reminds you more of a video game than most video game movies, there is certainly room for improvement.

First off, Alex Proyas - who directed what is still one of my favorite sci-fi films of all time, Dark City, has been on a downward slide ever since I, Robot. Knowing was plain crazy and with Gods of Egypt he has apparently taken a page our of George Lucas' prequel handbook and decided that flashy special effects are all you need for a good film. Sadly, even with giant snakes running amok, gods that bleed gold and all manner of traps - the film never manages to rise above the …

No posts have been made on this movie yet. Be the first to start talking about Gods of Egypt!