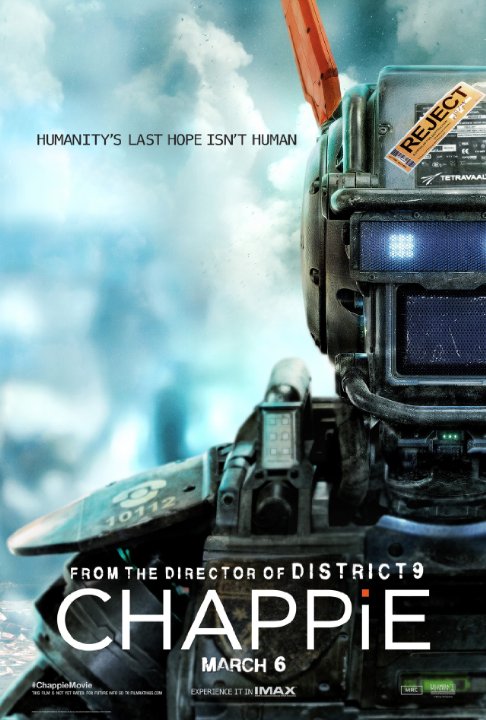 Plot: Chappie, in many ways, is the same as any young, gifted child - full of promise and dreams, influenced by those around him (for better and worse) and finding his way in the world to become his own man. But Chappie is not a child - it represents the first true A.I. - thinking and feeling on his own, and he will change the world. -- Chris Kavan

A software engineer who creates the first true artificial intelligence is kidnapped by a desperate street gang who wish to use his robotic invention as a means to rob an armoured car and pay off a ruthless criminal. Chappie is essentially the love child of Robocop and Short Circuit 2; as unpromising a proposition that may sound, Neill Blomkamp's third feature is not without its charms. The main problem with the film is its uneven tone; the humour revolving around Chappie's pretensions to being a gangster is rather juvenile and some of the violence towards the end of the film is unnecessarily graphic, meaning that it is a little too adolescent for an adult audience and a little too gory for children. Ninja is also an overplayed stereotype seemingly having wandered onto set from District …

What do you mean, "reprogram him"?
Don't play dumb! You know exactly what we mean.
Turn that robot into the illest gangsta on the block.

The number of robots used in a science fiction is uncountable. Some of them can easily be classified under the label "A sad, technical case". R2D2 in "Star Wars" was a pathetic robot most of the time. Twiki from "Buck Rogers" was a helpless phenomenon. David from "AI" was a terribly sad cyborg with the sole desire to become a real boy. Even Ava in "Ex Machina" was a sad piece of electronics searching for freedom. But "Chappie" (so called because allegedly he was "a happy chappie") easily beats them all when it comes to pettiness. I almost fell sorry for him. For the first time the gloomy existence of a robot was displayed. Doom and gloom all over …

Chappie: "I've got blings?... I've got blings!". That's the kind of dialogue you get from this movie and I was actually forward to this until I sawed.

The story is about a near future, crime is patrolled by an oppressive mechanized police force. But now, the people are fighting back. When one police droid, Chappie, is stolen and given new programming, he becomes the first robot with the ability to think and feel for himself. As powerful, destructive forces start to see Chappie as a danger to mankind and order, they will stop at nothing to maintain the status quo and ensure that Chappie is the last of his kind.

No posts have been made on this movie yet. Be the first to start talking about Chappie!