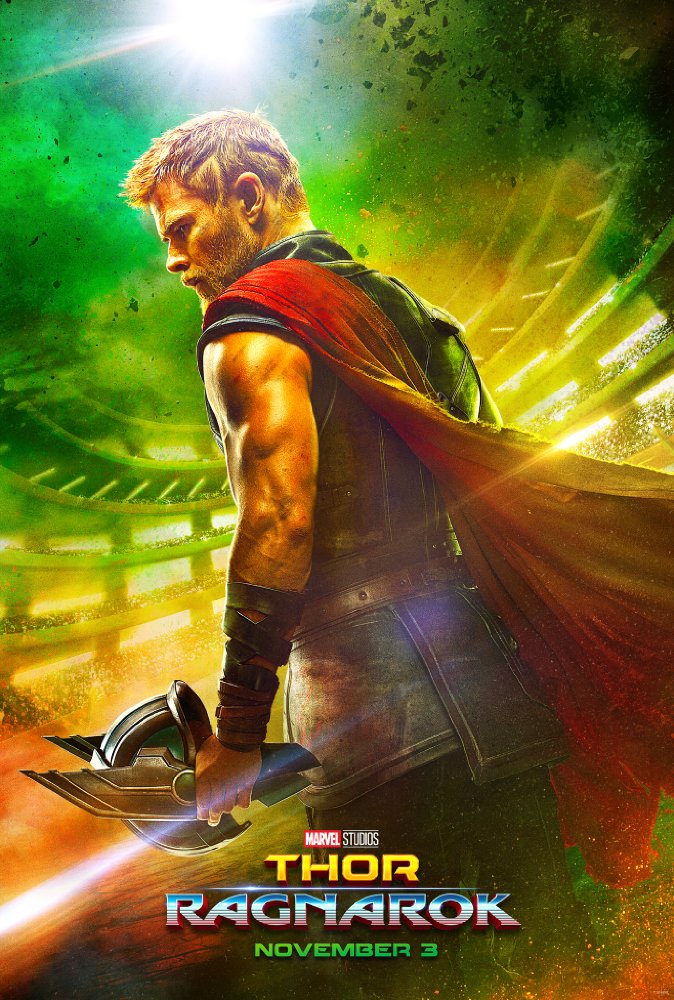 Plot: The return of Hela, goddess of death, sets in motion Ragnarok, which will destroy Asgard and all of its people. Thor races back home and races against time to prevent these end times against his people, but what will he do when he loses the power of his mighty hammer, Mjolnir and then is pitted against the Hulk in a gladiatorial match. -- Chris Kavan

Alright it looks like Thor finally is done with all that stiff, royalty thing and is now free to do his own thing. Sounds good to me!

If my kids love it, then I love it too. I actually like this kind of Thor more as he is much more kid-friendly.

I personally think it's a step towards the wrong direction. I hope they don't let Thor end up a goofball.

Hela the Goddess of Death is released from exile and begins a reign of terror on Asgard while Thor remains stranded and helpless on an alien planet, enslaved as part of their gladiatorial games.

The latest instalment in the Thor franchise is a primary colour-saturated, hi-camp space opera that literally looks like a comic strip brought to life. It makes no attempt at po-faced philosophy or clumsy moralising; it's just charming good guys versus irredeemably evil bad guys in an joyously exuberant tongue-in-cheek fantasy/sci-fi mash up that never fails to bring a smile to the face. Although some of the jokes are a little hit and miss, it's laugh out loud funny when it hits the mark, and it does so far more often than not. In its formula of endlessly bickering but hugely likeable heroes …

A Laugh Riot of Epic Proportions

The new Thor is a whole lot of fun - in fact, I would wager to say that director Taika Waititi has truly created the first Marvel comedy - as Ragnarok has just as many funny moments as action. But that comedy comes at one big expense - depth, because as much as I did enjoy watching Ragnarok unfold, I couldn't help but feel it was wasting its new talent, especially Cate Blanchett and Karl Urban. Still, if you want a good time, you won't find much better than the new Thor - and it is head and shoulder above either of the previous Thor outings.

After an action-packed opening where Thor battles a massive fire incarnate Surtur (voiced by Clancy Brown) and takes hit crown (one step in preventing his dreams of Ragnarok from coming to fruition), Thor heads back to Asgard to report his …

The God of Thunder returns in epic fashion!

A dazzling and splashy 80s-styled comic book adventure that blows both the previous Thor movies clean out of the water.

Director Taika Waititi is better known for his offbeat comedies and like James Gunn with Guardians of the Galaxy, it's evident in Thor: Ragnarok as well. With colorful special effects, cheeky humor, and quirky side-characters, the movie zips along from one action scene to the next. All the while, it opens the Marvel Cinematic Universe further for future adventures.

Chris Hemsworth is finally free to be more humorous and laidback as the noble Avenger Thor while Tom Hiddleston returns to chew the scenery as his ne'er-do-well brother Loki. Cate Blanchett is a blast as the crazed and psychotic Hela, or as she likes to remind others, the Goddess of Death. Tessa …

I'm&amp;nbsp;usually on top of my Marvel movies game, but only managed to get to movies last week to watch Thor.&amp;nbsp;But I have to say&amp;nbsp; I really did enjoy, it was a nice easy watch that held my attention throughout.&amp;nbsp;

hulk was good was&amp;nbsp; expecting more from the movie

Marvel's first, true action/comedy (Guardians of the Galaxy came close, but this is even more comedic than that one) - and, for the most part, it works. But comedy comes at the expense of any true dramatic tension, with Cate Blanchett's villain getting the short end of the stick - still, I overall liked it and kudos to Taika Waititi, who gets the best lines (as he should, he was also the director) as the rock gladiator Korg and for Benedict Cumberbatch's return as Doctor Strange in a hilarious &hellip;

I thought it was fine, a little too much on the comedic side, it was as if they couldn't spend two minutes without cracking a joke, even in the more dramatic moments. Still, plenty of funny bits and the action and special effects were pretty good. Hemsworth is probably at his best as Thor in this one, but I felt they wasted Hulk on the film, could have done much more with his character. Also, Cate Blanchett was a cool villain, but she stays in the areas of formulaic. Anyway, probably Marvel's &hellip;

I always found that the Thor movies tried way too hard to be more serious than they should - at least this time it looks like they're going to have fun with it.