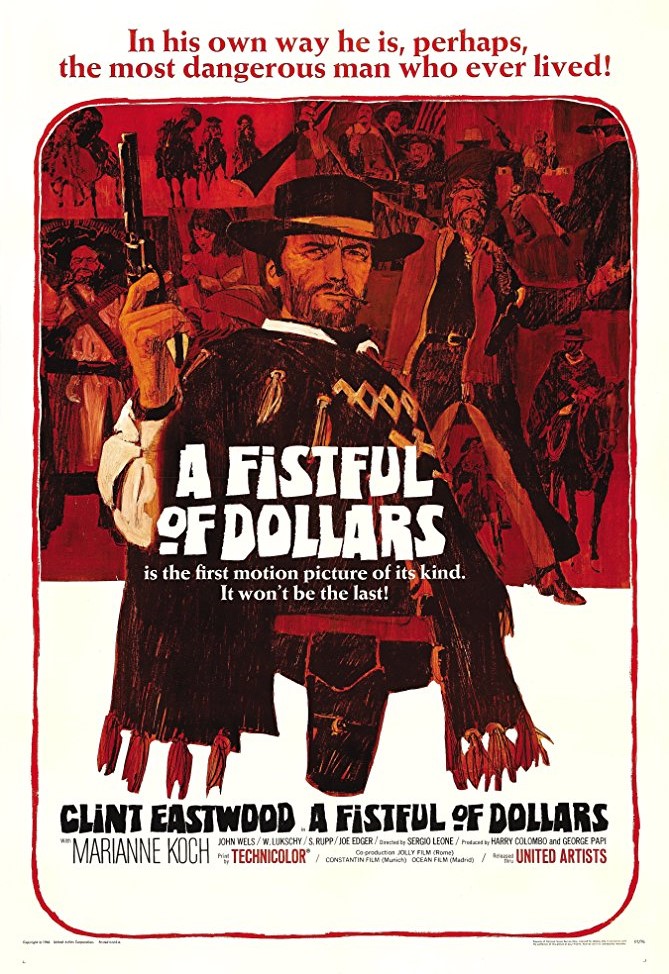 Plot: A man with no name finds himself in a town with two rival gangs. He plots to put them up against themselves for reasons other than games. When he himself is put in the middle he must chose which one he is for and which one he is against...or does?

An unusually stylish western, "A Fistful of Dollars" kicks off a brilliant trilogy, and leaves room to improve.

Super humor with super clint in this dark but cooled film, it is bit old but still better than most of nowadays action films

I thought this was excellent. It's humorous, suspenseful, dramatic, and action-packed. Is it as good as the last one in this trilogy? No, probably not. But, it's still an amazing movie.

A Fistful of Dollars review

One of the pioneers of the genre with stylish wardrobe and skillful direction. The Good, The Bad and The Ugly still stands out for this critic. The nameless man befriends the tavern keeper, and comes upon the coffin-maker while a turf war ensues between two rival gangs (namely Rojo brothers and sheriff Baxter and his men) and the coffin-maker is the only man who is making any money. Characters were likable and action sequences bountiful for western fanatics. Score was obviously well utilized and the pacing really effective. Some memorable quotes: "A man's life in these parts often depends on a mere scrap of information." and "When a man's got money in his pocket, he begins to appreciate peace." Fascinating how most scenes are managed just through gestures and close-ups. A Fistful …

"A Fistful Of Dollars" by Yojimbo

The introduction of the iconic man with no name saw Clint Eastwood catapulted to international stardom in this remake of Akira Kurosawa's masterpiece Yojimbo. Of course there's a certain irony in the fact that an Italian remake of a Japanese film shot in Spain would be the birth of the modern western, but the elements combine to fit the setting of the old west perfectly. The script has taken rather a trim in comparison, this film concentrating on machismo and gunplay rather than the more artful and character driven original; the result is that Eastwood's gunslinger comes across as more of a cynical operator than Mifune's aimless but moralistic samurai, and the build up has a brisk, almost rushed feel about it. But this film is all about the showdown at the end which, combined with …

Movies of 1964 by Stoney McStonerson

No posts have been made on this movie yet. Be the first to start talking about Fistful of Dollars, A ( Per un pugno di dollari )!