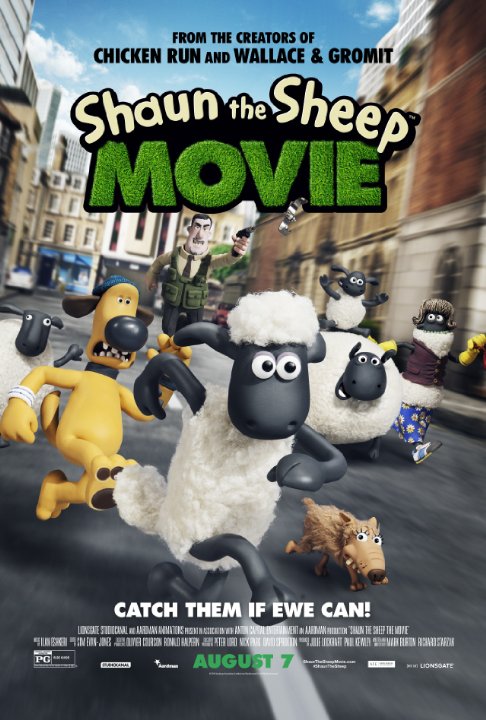 Plot: Shaun is just looking for some time off - but his impromptu vacation has big implications as a mix up with a farmer, a caravan and one very steep hill lead the flock into the Big City. Now it's up to Shaun to lead the flock back to the green grasses they are all familiar with. -- Chris Kavan

Albeit a sort of busy animated film, "Shaun the Sheep" is is a sheer delight with laughs at a rate of gags per minute.

Shaun the Sheep Movie (2015) PG Shaun the sheep (Justin Fletcher) decides to shake things up and take the flock to the big city to find their farmer. That was a big mistake, and now itâs time to get back to the country. This is an imaginative animated film from the same people that brought us the Wallace and Gromit series and the very funny Chicken Run. The kids will enjoy the action of the stop motion animation and adults will enjoy the humor, some of it very subtile. The storyline is creative and the animation is fun to watch. My Rating: Full Price - See more at: http://lastonetoleavethetheatre.blogspot.com/2015/08/fantastic-four.html#sthash.emahXz6q.dpuf

Shaun the sheep is one of the most simple movies I've ever seen in my life, but I think that it really works to its advantage. Created by the same guys who did Wallace and Gromit, Shaun the sheep is the new claymation movie based on the hit TV show in Britain by the same name. The story is really simple as it's about the farm sheep and the dog Bitzer, led by Shaun the Sheep, who are trying to find their owner who got lost in the big city. One important things to know going in to it is that none of the characters have any dialogue whatsoever, including the human characters, who can only talk through mumbling. But because of the way that they were able to express their emotions, it really works well to its advantage. As you might expect from Aardman Animations, this is a really funny …

Shaun the Sheep is an outstanding movie, which will make kids go crazy. Children are going to laugh, and jump off their chairs when they see Shaun in action. The bright colors, excellent graphics, outstanding direction and a steady pace of the movie will keep children engaged throughout. This movie can be equally enjoyed by the adults, and is definitely set to bring a smile on adultsâ face.

Shaun the Sheep excellently shows how even the smallest mistake can make things go wrong and get you in trouble. While this would sound normal if you were a human being, it becomes extremely difficult if you were a sheep. Shaun â the Sheep is in one of such situation who overcomes his challenges to get life back on track.

Fun Delight for ALL Ages

'Shaun the Sheep Movie' is the latest film from those claymation masters at Aardman. It's based on the television series that originally spun off from the Wallace & Gromit short 'A Close Shave'. If you like any of what I just mentioned, or simply enjoy lighthearted animated entertainment, then this movie is most definitely for you. I've been a fan of Wallace & Gromit my whole life, but have never seen the 'Sheep' series. Now I wish I had. This movie is a pure delight from beginning to end. Terrific animation, charming characters, and very clever humor are the focus of this fun little flick. The complete lack of dialogue really strengthens those focal points. It's the kind of stuff that Aardman have been doing best since they started. The parts we remember the most in their works …

No posts have been made on this movie yet. Be the first to start talking about Shaun the Sheep Movie!