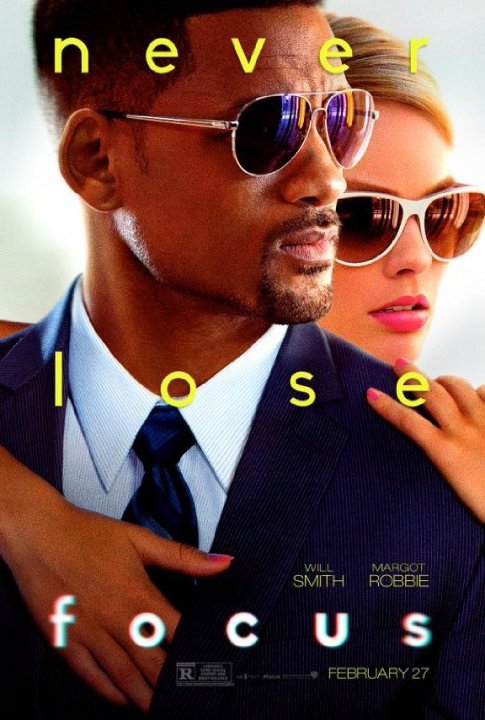 Plot: A long-time grifter decides to mentor a young, attractive woman, but things get complicated when he the two become romantically involved. -- Chris Kavan

A light and breezy caper with comedic and romantic touches, Focus works far better than it should thanks to Will Smith and Margot Robbie. They don't have the best chemistry but they're both so effortlessly charming on their own or even together sometimes that it draws you into the movie. Even when it is pretty implausible at times. The supporting cast are mostly unknown actors but there are two great appearances by BD Wong as a gambling addict and Gerald McRaney as a foul-tempered and foul-mouthed antagonist.

I've been a Will Smith fan since his inaugural t.v. show " The Fresh Prince Of Bel Air" I knew even back then that this dude was talented...back then however I didn't realize to what extent. The man is multi talented and pulled this mediocre flick out of mediocrity with another top notch performance given within. The storyline in my opinion with a few " I didn't see that coming moments " Is just."Alright" Although subtlety is not always a bad thing. Anything more might've ruined this film completely. Its worth a watch. For any dedicated Smith fans who will watch anything he puts out much like myself .

A rom-com mixed with crime.

"When you have their attention, you can take whatever you want. You have to be safe."

"Focus" is a romantic crime movie in which the art of pickpocketing, manipulating and swindling is the point of focus (how appropriate). The end result isn't memorable cinema, but a typical popcorn movie with a scam duo fluttering around each other as lovestruck butterflies, playing a masterful game of seduction. Or is it also a con game? The whole film is a succession of ingenious orchestrated scams and ruses. Unfortunately, the ultimate scam is explained in detail very early in the film, so you can predict which direction its heading. Although, it's as entertaining as "Ocean's Eleven", filled with illusions as in "Now You See Me" and with a romantic storyline squirming itself through it.

The biggest thing that con-men can't stand is being coned be other con-men, now try to let that sink in.

The story is about a long-time grifter decides to mentor a young, attractive woman, but things get complicated when he the two become romantically involved.

Okay I got to admit I wasn't very interested in Focus when I first heard about it, I just thought it was another mediocre Will Smith film that's trying to be a box office hit, even when the trailer came out I still wasn't interested in it. Until I sawed my favorite YouTube reviewer Chris Stuckmann reviewed the movie and give it a positive rating and shortly after that I sawed this movie hit number one at the box office, and now I was interested and after seeing the movie I can say that the movie was...okay.

No posts have been made on this movie yet. Be the first to start talking about Focus!