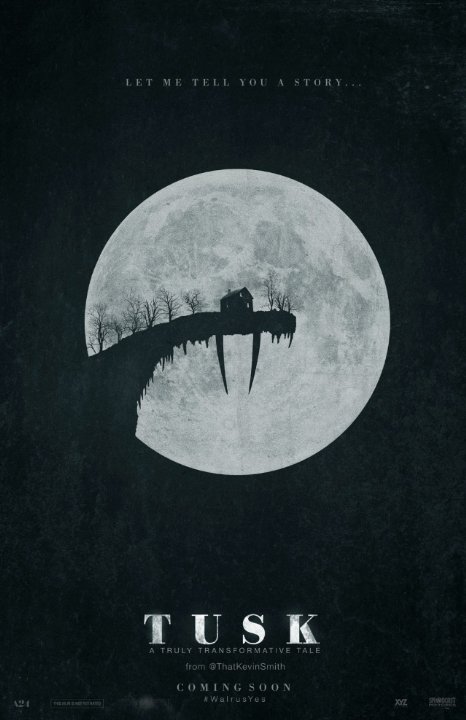 Plot: A young man goes searching for his best friend, and podcast co-host, after he goes missing in the backwoods of Canada, along with his friend's girlfriend. -- Chris Kavan

'Tusk' might be the most original film I see all year. Michael Parks gives a show-stealing performance as the main madman. His presence, along with a completely unrecognizable famous actor in a supporting role (which I won't spoil), elevate the humor and disturbing elements of the film. Many label this a horror/comedy, and that is very true. There are laughs and shocks aplenty. I was often surprised. However, with the consistent plot turns comes an inconsistent tone that hindered my enjoyment in slight. It may not mesh as one complete whole, but the many bizarre set pieces and solid comedy are well worth the watch.

The story to Tusk is about a young man goes searching for his best friend, and podcast co-host, after he goes missing in the backwoods of Canada, along with his friend's girlfriend.

Tusk was a movie that I never heard of until last week when I got a chance to watch it. But before seeing it I heard a lot of mix reviews for this movie, some people say it's like a guilty pleasure to them and they had a good time with the film, but with other people who said the movie is laughably bad and nothing to it.

In my opinion Tusk is a okay movie and I was actually surprised that I didn't laugh as much as I thought I would, but there are some scenes that made me laugh a little bit like Justin Long character (Wallace) start's to scream for …

The Best Hybrid of the Year

Who knew that having a podcast would lead Kevin Smith back down the directing road? Based on a random podcast based on a random "wanted" article (which, according to the movie trivia, was written as a prank directly aimed at Smith) - Smith decided to take a chance (and thank the lord Michael Parks went along with it) on this hybrid of Clerks-type-rapid-fire-humor mixed with the horror of Human Centipede. While the result isn't perfect, I enjoyed it much more than Smith's last attempt at horror, Red State, that I just couldn't get into.

Justin Long and Haley Joel Osment play a pair of podcast comedians who run the "Not-See Party" (the name of which provides plenty of fodder throughout the film). Long's Wallace Bryant character goes out into the world and describes his experiences with …

Kevin Smithâs Tusk originated from a joke; and that becomes explicitly apparent once youâve actually seen the film. I havenât listened to the âhilariousâ podcast conversation that was the birth place for this film, but I doubt that much has been changed in the translation. Tusk feels very much like itâs being told from the perspective of your friend who has just read this really messed up thing on the internet and wants to tell you all the weirdest parts.

But is that a bad thing? I for one quite enjoy laughing at bizarre things on the internet, as do most of the people who will bother to see Tusk. I wonder: Is the surreal jokey-ness of the film a strength or a fault? Iâm not really sure.

Tusk has moments of both terror and humor, and they overlap in some really …

Favorites of 2014 by Austin Shagwell

No posts have been made on this movie yet. Be the first to start talking about Tusk!