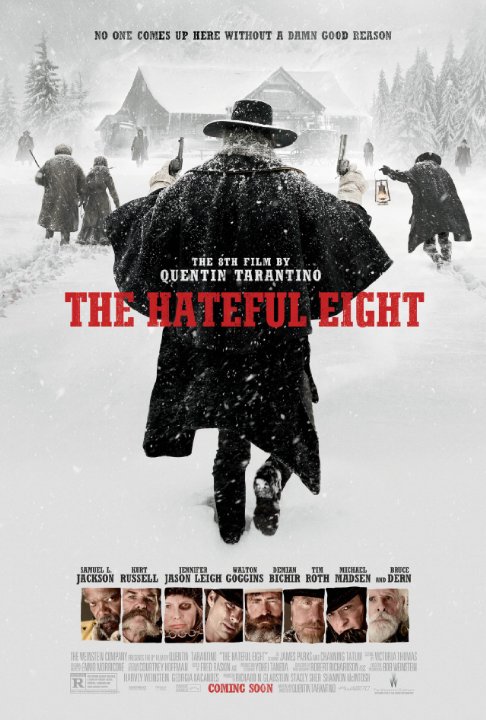 Plot: A blizzards strands together a group of bounty hunters and ne'er-do-wells in a Wyoming cabin. But the small group is about to face a trail of betrayal and deception - and survival is certainly not guaranteed. -- Chris Kavan

Quentin Tarantino pulls it off once again! "The Hateful Eight" is vivid and violent. What more could you ask for?

Splendidly morbid and claustrophobic western with a great cast.

I have mixed feelings about this one. It's definitely not Tarantino's best, but I don't think it's his wort either. The concept is great, 8 "strangers" are stranded in Minnie's Haberdasher during a blizzard and fireworks ensue. But, the movie felt a little long and I felt the the actors weren't giving it their all, they seemed a little flat. One nice thing about the film, the great Ennio Moricone's soundtrack. For fans of Tarantino, like myself, this is a must see, but, it's just ok when compared to his other films. I would say go see this, but don't expect it to be as good as Django.

"The Hateful Eight" by Yojimbo

A bounty hunter transporting a murderer shelters from a blizzard in a remote way station, but begins to suspect that some of his fellow travellers are not who they claim to be.

Quentin Tarantinoâs eighth film is not only an obvious homage to the Spaghetti Western, but also a kind of Agatha Christie-style whodunnit. As ever with his films, the cast is strong, the dialogue characterful and the outdoor scenes are beautifully shot, although thanks to the fact that the film is set almost entirely within the same room, it does feel very stagey. This leads to my one issue with it, which is its sheer length; although it never drags exactly, I couldnât shake the feeling that the story couldâve been told in two hours quite comfortably. The film actually weighs in at two and three quarters …

I read that one of the major influences for Tarantino for The Hateful Eight was John Carpenter's claustrophobic, paranoid horror classic, The Thing. It makes a lot of sense in that if you turned that film into a western and got rid of the alien (but kept all the mistrust and paranoia) you would wind up with this film. You even get Kurt Russell to star and Ennio Morricone (who worked on The Thing) to score the film. It all works out in the end and I am happy that a little breach didn't shelve this movie for good.

Tarantino presents The Hateful Eight as a kind of stage play - it all takes place (for the most part) in one location among a small group of actors. I would have killed to be able to see the road show version, but, alas, it didn't play near me to indulge in such spectacle. A …

No posts have been made on this movie yet. Be the first to start talking about The Hateful Eight!