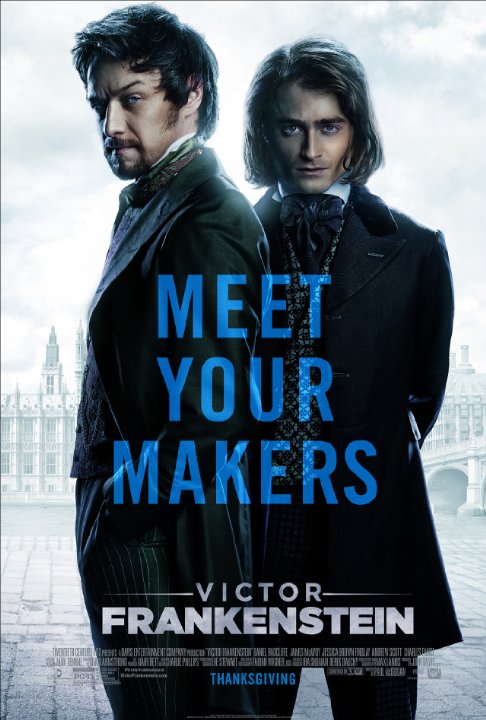 Plot: Explores the dark origins of the man called Igor - his friendship with a young, medical prodigy Victor Von Frankenstein and his participation and witness to the legend that is to be known as "Frankenstein's Monster". -- Chris Kavan

This new take on the classic horror story is just a dreary and slow attempt at cashing in on the popularity of the Sherlock Holmes movies with Robert Downey Jr. It would only be considered a smart move if they made the film five years ago when those were still fresh in everyone's minds. I remember the trailers for this using the same damn trailer music. While McAvoy and Radcliffe try their best, the movie is often lacking in action and fun. In fact there are some genuinely depressing and uncomfortable moments in the story which is supposed to be a quirky buddy flick. The last twenty minutes is when the cool stuff happens. Reminds me of watching the Lone Ranger and this is a worse film but at least Victor Frankestein is an hour shorter.

*Movie opens with Igor narrating* Igor: "You know this tale". *MOVIE CUTS TO THE END CREDITS* Red Letter Media basically summed up the movie in the most funniest way possible. James McAvoy and Daniel Radcliffe were great in the movie, but that's really it.

Science Bros. ... And Maybe a Monster

'Victor Frankenstein' is an odd retelling of the Frankenstein mythos. The entirety of this film is focused on the meeting and teaming of Dr. Frankenstein and his assistant Igor. Both characters are well realized and well acted. McAvoy and Radcliffe have a believable working comroadarie. The pair are presented as equals. They bond over their knowledge of science, initially, but become distanced due to Frankenstein's over-obsession to his work. This felt as if it was leading to a nice dramatic conclusion between the two, but the second half drops the ball in almost every area. The whole movie is build up with no payoff. It's essentially 1 1/2 acts of a full story. Short bits of action don't coincide well with the rest of the film. The couple of chases/scuffles are shown with the …

No posts have been made on this movie yet. Be the first to start talking about Victor Frankenstein!