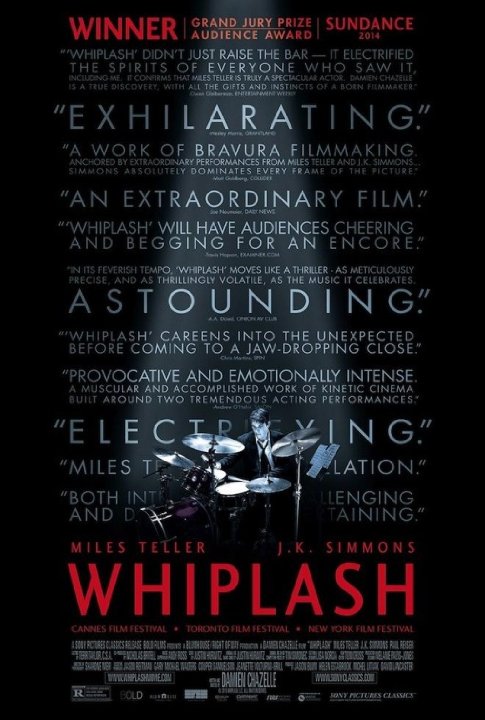 J. K. Simmons rules every scene, and Miles Teller gives an extremely underrated performance in this intense drama that is one of the best films of the decade.

Who would have thought a film taking place mostly in a conservatory would be so intense? J.K. Simmons (who won nearly every award under the sun for his role) is a harsh task master, but one who thinks the only way to bring out the best is to push people to their limits (and perhaps a bit beyond). Mile Teller is the student who wants to be the next, great jazz drummer and is willing to sweat, bleed and take the abuse to get there. The two have a battle of wills - who wins - who loses? That might be up to the viewer to decide, but the real winner is whoever gets to watch this powerhouse of a film.

Who would've thought that a film taking place mostly within a music school and a performance hall could be so suspenseful? But this is! It's a well acted roller-coaster of a ride that will leave you wanting more! J.K. Simmons totally deserves his Academy Award. He's pure evil and yet, I really do think he means well. The weak link here is Miles Teller and Andrew, but he's not all bad. This is a must see!

A gifted but socially awkward student in a respected music conservatory is chosen to play in their lauded jazz band, but suffers indignity and abuse at the hands of his perfectionist of a teacher.

The premise of Whiplash sounds like on of those cliched boot camp style movies in which grudging recruits come to admire their gruff sergeant despite his harsh methods as they learn that he is merely attempting the bring out the best in them. There is a certain element of this, although the character dynamic of Neimann and Fletcher is rather more complex than that; it's essentially about the fine line between a mentor being inspirational to encourage his charge and emotional abuse. Miles Teller puts in a fine performance as the isolated, obsessive student desperately trying to achieve the …

Stakes claim as an indie frontrunner

Independent films have grown increasingly popular as of late. 2014 was filled with these types of movies that seemingly came out of nowhere, and âWhiplashâ was one of the frontrunners.

Miles Teller plays Andrew Neiman, an aspiring jazz drummer attending Shaffer Conservatory in New York City. Terence Fletcher, played by J.K. Simmons, is a well-respected instructor at the university who takes notice of Neiman and recruits him for his studio band. Neiman's excitement to join the band is short-lived however; as Fletcher's brutal methods of teaching prove to be immensely taxing, physically and emotionally.

Brutal is an understatement of how cruel some of Fletcherâs methods are. Throughout the film it is difficult to tell if he is one of the protagonists or antagonists, if he is …

Whiplash is a narrative, not a documentary. Yes there are many unrealistic parts about music, especially jazz, in this film. I admit that these musical inaccuracies may be laughable, but I truly believe that absolutely everything inadequate about the jazz pedagogy or what have you can be easily overlooked. Therefore, those attributes DO NOT count as any type of flaw of the movie by any stretch of the imagination. Whiplash is simply a work of fiction.
The character relationships are simple enough to grab anyones attention, as we are introduced to the main character Andrew Neyman (Miles Teller) and Terence Fletcher (J.K. Simmons). In a fantastically crafted way, seeing the development of the main charactersâ connection turn into a heap of tension was outstanding. Even so, the …

No posts have been made on this movie yet. Be the first to start talking about Whiplash!