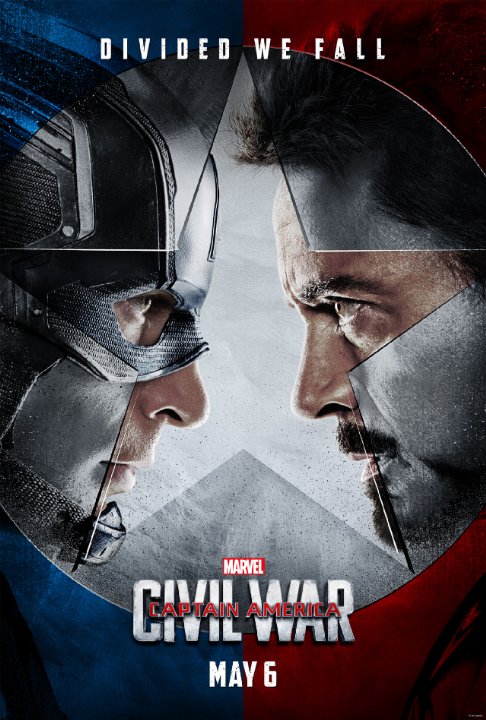 Plot: With the world reeling from the incidents in Sakovia, a new accord is introduced to bring the heroes in line. But for Captain America, who is trying to protect his friend Bucky (aka The Winter Solider) it goes against all he stands for and soon creates a rift in The Avengers - one that will lead to a battle between the two sides. -- Chris Kavan

This battle between Marvel's finest superheroes left me hanging on the edge of my seat. It was a great one, seeing how friends had to choose which side will they choose, and to fight for what they believe is right.

Spiderman and Black Panther's introduction to this movie made it a whole lot better. And we can expect that that is a foreshadow for their upcoming movies, too.

Civil War is just like the prequel for the Infinity War, where a lot of Marvel's heroes are showcased. More hyped to see what will happen after the Avengers were disbanded.

When Steve Rogersâ estranged comrade-at-arms James âBuckyâ Barnes is charged with an act of terrorism that costs the life of the King of Wakanda, he finds himself on the wrong side of the law and his fellow Avengers are sent to hunt him down.

Despite the monicker, the third Captain America film is an Avengers movie in all but name. The plot revolves around a schism that forms within the team when the U.N. imposes a new charter which demands oversight concerning their activities, and this conceit works reasonably well as neither side is 100% or 100% wrong making for some nice moral grey areas. It is a shame that the central theme â that of the fact that The Avengers are an unlicensed organisation of vigilantes who wreak mayhem wherever they go with no actual legal authority â …

Captain America Civil War, a new captain america film that stores a lot of emotional weight to the character super heroes so called the Avengers, to fight for. The main duo is between Steve and Stark.
Steve fights for something he is worth for and Stark wants to punch him on his perfect teeth. Civil War is a film that grips with its plot, that allows avengers to decide to follow or not. Some agree, some do not. So clash starts now. The whole Civil War plot, is revealed in one scene. Rest of 120 minutes is pure fun. But there are twists and turns at right points, crazy fan boy moments, and the emotional rift of Stark and Steve bursts open towards the end. No spoilers, though. Russo brothers pack a solid entertainer for most of them. Every fight scene, except the shaky cam sequences give …

Eight years ago, Marvel took the reigns of the superhero genre with âIron Man.â Twelve films later and Batman, Superman and the X-Men are still playing catch up. With both the comic book fan and casual moviegoer in the palm of its hand, Marvel could have played it safe with this one. A run-of-the-mill action fest would have brought in the dough, while also entertaining the masses. But, yet again, Marvel showed us why itâs number one.

âCaptain America: Civil Warâ poses a question that may have crossed your mind while watching âThe Avengersâ or âAge of Ultronâ: in the midst of the mind-blowing action taking place on screen, how many innocent civilians were killed?

Within the first half hour of the film, the Avengers are shown footage from major events in past Marvel …

No posts have been made on this movie yet. Be the first to start talking about Captain America: Civil War!