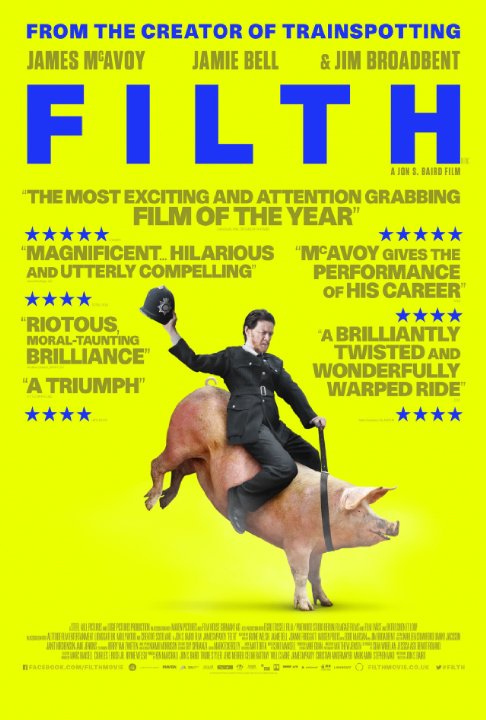 Plot: Bruce Robertson is many things: a cop, an addict, bi-polar, bigoted and, recently, alone. Seeking to a promotion, and to reconnect with his family, he does everything in his power to manipulate those around him (while not under the influence) in order to secure is future. -- Chris Kavan

McAvoy's performance is admirable and carries this atrocious film, but if you want to see an impressive movie based on an Irvine Welsh novel, might I recommend "Trainspotting."

And indeed, this is the filthiest comedy-crime I've ever seen! It is very rare to see films that is highly entertaining and sensible at the same time. I see the best James McAvoy in this. The rest of the cast also stood for me. Really nice! The twist got me!

'Filth' is a dark comedy that lives up to it's title from a great amount of crude content. The brash humor is often quite funny, due to the gleeful and energetic nature of the whole piece. We follow the fowl exploits of this detective (played by the flawless McAvoy) as he schemes and scams those around him for personal gain. Essentially, it's a character study that dives into some psychological aspects in the latter half. This area becomes a bit heavy, with less emphasis on comedy, but it still entertains all the same. Bring on the filthy fun!

A bent copper with a drug habit competes with his fellow detectives for a promotion whilst trying to solve the case of a Japanese tourist murdered in an Edinburgh underpass. Trainspotting meets Bad Lieutenant in this adaptation of Irvine Walsh's novel that unfortunately lacks the deft touch of Danny Boyle in representing the seedy underbelly of modern Scottish life. By far the biggest problem with Filth is that its protagonist is so fundamentally unlikeable; he's a deranged, drug-fuelled, misogynist bully who indulges in an orgy of violence and depravity throughout the entire length of the film and basically has no redeeming features whatsoever, making his "redemption" very difficult to care about. There is some amusing black humour, particularly at the beginning of the film, but without …

My trips to the cinema 2013 by Maxine the Movie Gal

No posts have been made on this movie yet. Be the first to start talking about Filth!