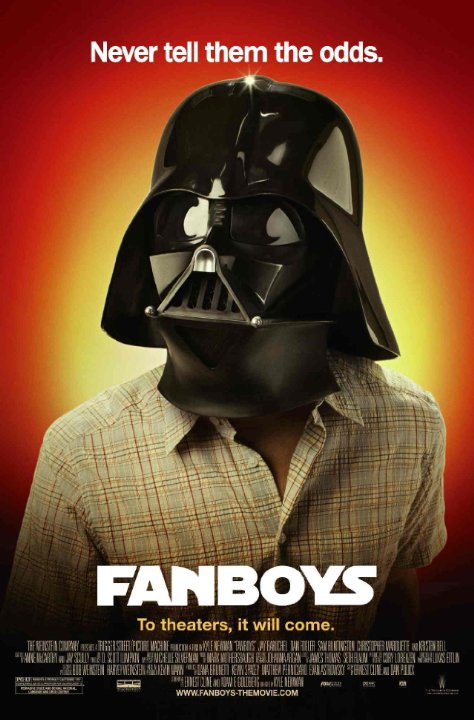 Plot: An aging group of Star Wars fans decide to give their dying friend his last wish: to steal an advance copy of Episode I from Skywalker Ranch so he can watch it before he dies. -- Chris Kavan

A very inconsistent movie. Some parts were quite funny, while other fell kind of flat. Some aspects were probably better in concept than in reality. Rather than making fun of Star Wars or Star Trek it embraces the zeal with which such fans support the movies they love. Enjoyable not not great.

Fanboys is good for a quick laugh and pokes fun at Star Wars and Star Trek. The plot is alright, but very predictable. After watching the movie the first time, the movie becomes boring. Good for an afternoon time waster.

Fanboys are people that remain loyal to something, no matter how much it sucks. The movie consists of 4 male Fanboys (Hutch, Linus, Eric Bottler and Windows) and 1 female (Zoe). Its story revolves around the friendship of the Star Wars fanatics who had an idea to steal an early copy (or rough cut) of Star Wars Episode I â Phantom of the Menace by going to the Skywalker Ranch. Linus is dying with cancer and has a bitter relationship with one of his buddies Eric. Eric becomes more a salesman/career oriented unlike his friends who chat online to meet a girl (Windows) and who lives in his motherâs garage playing video games all day listening to Rush music (Hutch). The film is like a lighter version of the Hangover since its premise is to travel on the road to accomplish a mission as …

I think that if they market this right that there could be some success to come from it.&amp;nbsp; I still don't have a lot of confidence in it.