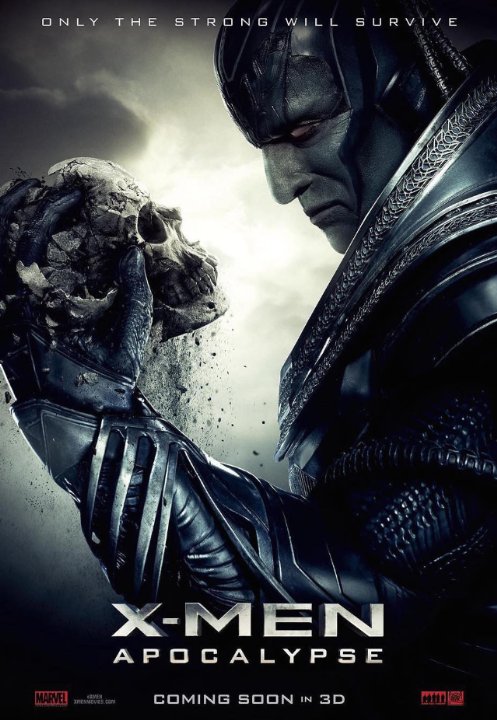 Plot: Although thought to be a recent occurance, mutation has been with mankind for a long time. Apocalypse, worshiped as a god and harnessing the power of other mutants to become nigh immortal, has been awakened after thousands of years. Seeing the world for what it is he is disillusioned and, joined by his four horsemen, seeks to cleanse mankind and start anew. With the world on the line, Professor Xavier and a group of young mutants must work together and come up with a plan to stop the greatest threat the mutants, and the world, has ever seen. -- Chris Kavan

While Evan Peters shines as Quicksilver, none of the other mutants make a very large impression in this mechanical and immediately forgotten end of the world dribble of mediocrity.

Not a bad X-Men film. I have to admit, I love the X-men, but these superhero movies have got to stop. I'm just tired of them. The gratuitous Wolverine cameo was just fan service. I do like the fact that they are getting rid of the all black suits in future films. But seriously, just stop it.

X-MEN: Apocalypse is an overly long but pretty entertaining comic book movie. Bryan Singer finally lets the X-MEN fight and use their powers in all sorts of absurd ways. The gigantic cast is not evenly distributed; Olivia Munn is sorely underused as Psyclocke. But the newcomers are a welcome addition to the series. The movie clocks at two and a half hours same as Batman versus Superman and Captain America: Civil War. It's better than the first one but not quite as good as the latter. For the XMEN series, it's probably not the best but it's got so much jam packed and so many crazy things going on, it's too much to dismiss.

An ancient mutant is revived and enlists the aid of Magneto and three other powerful individuals to reshape the world in his own image. X-Men Apocalypse is a new X-Men origin story which takes advantage of the time meddling of Days Of Future Past to essentially ignore many of the previous events of the franchise. Bryan Singer once again takes the helm and in one scene even openly mocks the weakest instalment The Last Stand, but he actually makes many of the same mistakes of that particular film. There are too many characters - many feeling pointless and dispensable, the set pieces are handled like a child playing with action figures rather than providing any emotion or drama and the relationships are superficial and poorly realised; in particular the flashbacks to the first film and …

X-Men: Too Many Cooks

X-Men Apocalypse is the culmination of the "new" X-Men films that began with First Class then ramped things up with Days of Future Past. Apocalypse tries to one-up the previous film but in doing so I think it oversteps and gives us a lot of characters but not enough depth. Sure, you still have plenty of cool mutants and a lot of destruction but little of the heart and character that worked so well in the previous films.

Jean Grey (Sophie Turner) says it best when coming out of "Return of the Jedi" - "Well, at least we can all agree the third one's always the worst." Apocalypse has probably the best and darkest villain out of any of the X-Men films. Sure, he may look somewhat ridiculous in that getup, but Oscar Isasc is frightening. The "first mutant" if we are to believe, has spent …

'X-Men: Apocalypse' is the disappointing followup to the immaculate 'Days of Future Past'. Being a lifelong X-Men fan, I tried to set modest expectations after the towering success of the previous film in the series. This sequel continues in the new timeline set forth from the events of 'DOFP', seeing the younger versions of our older characters first meet the younger iterations of our able heroes from the other films. The biggest positive right off the bat is the new youthful cast of actors. All of their representations of the characters were on-point. Much time in the first half is spent on their introduction. The drawback to this being that we only see them in action for the final showdown. A big chunk of the first half is also used to setup the new villain, Apocalypse. He has …

i am extremly excited about this movie whose with me