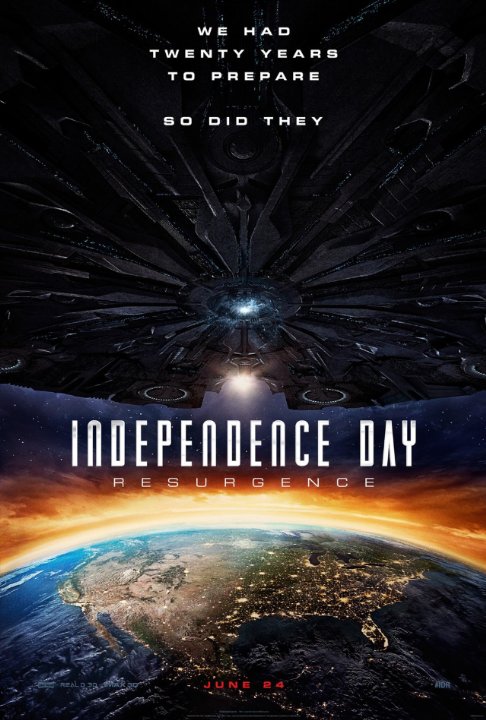 Plot: Following the devastating attack by an alien force, the nations of the Earth have come together, using recovered alien technology to create a massive defense initiative. But when the aliens return, with a larger and even more advanced force. Forced to the brink of extinction, mankind will put their hope behind a small group of people - some who have faced this threat before. -- Chris Kavan

The first "Independence Day" isn't as good as everyone thinks it is, and this cash grab sequel is about 15 years too late.

After twenty years of peace, the Earth is once again threatened by alien invaders responding to a distress signal sent during the original attack.

They're baaack...this belated follow up to the very dumb but very fun Independence Day follows the formula of the Hollywood blockbuster sequel to the letter; the monsters must be much bigger, much badder and the script should be virtually identical to the original film's, but worse. In this instance, rather than the size of a city the alien ship is the size of a continent, so when it lands it looks like the Earth has been clamped. The "alien queen" makes James Cameron's original look like Tyrion Lannister's little sister and whenever anything huge is likely to explode or topple over, there is always a school bus full of innocent children …

Bigger,slicker,more devastating but silly too

I never thought I would miss Will Smith in a movie. Well, for everything there's a first time. And damn, I missed our friend Smith in this sequel of the blockbuster from 1996. Not because of his acting talent or his good looks. But because of his dry humor and his sometimes hyperactive behavior. Smith was honored by the brief display of a picture somewhere in a presidential corridor. His absence in this film was due to a fatal accident during a test flight (Personally I think the paycheck was a disappointment to him). As a worthy successor his stepson Dylan (Jessie T. Usher and fortunately not Smith's son Jaden himself) is summoned to help.

The big difference with its predecessor, is the total lack of …

ID4:Resurgence could use a helluva lot of rewrites

The biggest obstacle facing this long delayed sequel to the 1990s' quintessential blockbuster was how it could distinguish itself from all the other disaster films that borrowed from its far superior predecessor. Everything is bigger in this go-for-broke continuation of ID4's fight against alien invaders but notably, what has changed is now we're in a futuristic 2016 where alien technology and human resolve are united in a militaristic utopia.
The new cast members aren't terrible for the most part but not memorable. ID4 had some campy humor and hammy acting but at least you remember all the charismatic leads or quirky side characters. Some come back like Jeff Goldblum, Bill Pullman, Brent Spinder, and Judd Hirsch. The trio that we're supposed to consider our heroes (Monroe, Hemsworth, …

No posts have been made on this movie yet. Be the first to start talking about Independence Day: Resurgence!