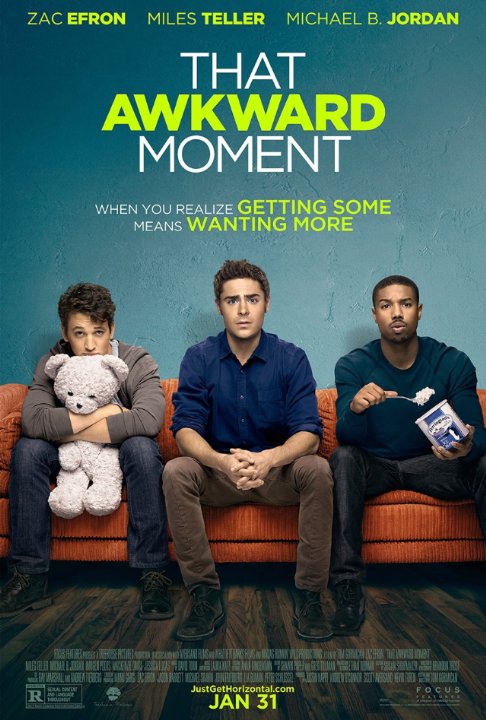 Plot: Three male friends all find themselves at that crucial point in their respective relationships where they must answer the question of just where that relationship is going. -- Chris Kavan

This film is about three best friends who find themselves where we've all been- at that confusing "moment" in every dating relationship when you have to decide "So...where is this going. This movie was not my cup of tea because the romance bull crap as all been done before.

Average movie , it says its a comedy? well there's a couple of scenes that willl make you smile but its not a comedy , it doesn't even try to be .its about 3 guys who decide to make a pact to stay single but one by one break the pact. , its basically a romance movie with zac efrons character and the rest are all co stars. its nice enough. and romantic and with a few smiles along the way its harmless soft not original and very predictable. but its well made and hard to knock it too much. it is what it is. a chick flick with guys

This was awfully awkward

"We'll use a coupon and get him a cheap hooker."

Occasionally I feel like watching a comedy. I don't even mind if there's some romance in it. A movie to watch while lying down on a cozy seat in a lazy relaxing way, with a ridiculous big bowl of popcorn on your bulging belly,hoping that it'll be flung off while viewing the selected comedy. The more the bowl rolls of your belly, the better the movie. That's a sign that there's quite a lot to laugh about. In "The Awkward Moment" you can be sure that the bowl only leaves a circular print on your stomach,because there's not much to laugh about in it. And I doubt whether the level of romance is high enough to call this a romantic comedy. Or romance means to you : having someone who you are dangling an artificial carrot in front of when it's …

The Awkward Moment When You Want To Shut This Off

Trust me there are plenty of places I could have shut this movie off and i wouldn't have missed anything but for some unknown reason I kept thinking it would get better and it never did. I think this was meant to be a guys romantic comedy, to bad they missed on the about every note. There were a few things that make you chuckle but over all the movie a very boring and predictable.

When it isn't boring or having one of it's rare laughs it is being gross and vulgar. Yeah I get it guys can be gross and vulgar, I know I am a guy., but no one wants to see that on film. They went way overboard on the gross and vulgar, maybe other guys get like to show and talk about things that my buddies and I don;t talk about but I don;t think most guys go quit as far as they do in the movie.

That awkward moment when this movie f*cking blows.

I know relationships are not as simple as they are in this one, I know it is way too cheesy and so into itself to be anywhere near realistic to the way two people act or look or dress or do things for that matter, nevertheless, I found myself not hating this one. Just hating it slightly.

While it does try to undermine and have fun with the concept of 'being different from a normal date movie' it doesn't understand that it falls directly into the same category by the 45-minute mark.
The screenplay is by far the most disappointing aspect of the movie, relying on typical situational humor which no one on earth would use in reality, but the unfunny jokes and juvenile, pitifully bad delivery and comedic timing are the least of this film's faults.

The characters are first-world-problem …

No posts have been made on this movie yet. Be the first to start talking about That Awkward Moment!