All is Lost Movie Information 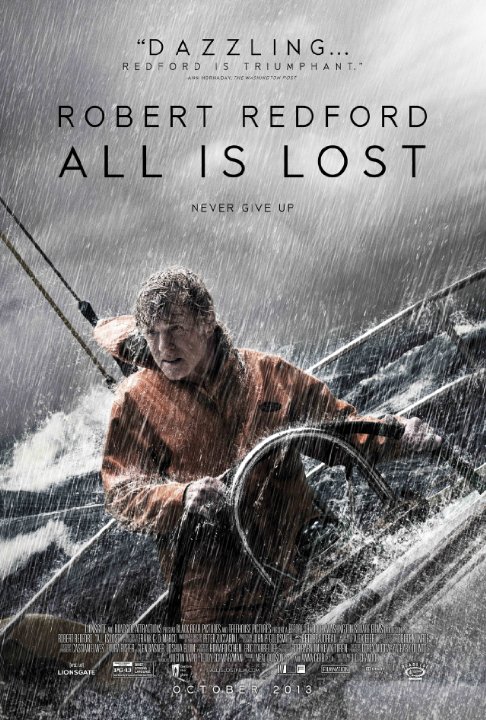 Plot: A lone sailor is forced to put all his skills and resourcefulness to the test after a collision with a shipping container and a looming storm, threaten his life. -- Chris Kavan

An intense survival movie, with a solid almost completely non-verbal highly physical performance from the usually inert and boring Robert Redford. Here he carries the movie on his back. One negative is the pretty bad musical score. A great score would have made the movie even better.

People and critics are loving this movie to death but to me it is like life of pi with out no tiger and visual effect's. this movie has no talking at all and am okay with no talking in movies but this movie feels a bit slow for me.

All is lost ... especially my time

Normally I start a review with a quote from the film in question. That's a bit difficult in this case since "All is lost" lacks any conversation. The only thing that would qualify is a frustrated cry of the famous F-word. For the rest it is just sloshing water, creaking wood, nois of hitting ropes and lots of rain and falling water, you hear throughout the film. I can understand his frustration, because how the hell is it possible to have a collision between your pleasure boat and a container on that immeasurable ocean while doing an afternoon nap ? It's difficult to call this movie unnerving exciting. I dare to say that it was dead boring after a certain time. The only decision I took after watching this film is that I'll never set foot on such a boat and float around on the ocean with …

impressive art but a touch souless

a disaster movie with just one man and a boat. no other actors or speaking., as a work of art its really good. and really well made. it works. but as a form of entertainment. i would of liked some dialogue even its just the guy swearing from time to time. anybody in real life on their own in that circumstance would of said something even if it was just jesus now what etc etc. yet nothing is really spoken, which makes it kind of souless.
redford is good but he doesn't bring the real human element to the film as you would expect. the anguish and pain he instead just seems very comfortable with his boat in ruins and storms and his life in the balance . far too comfortable.
but as a work of art which it is. then its great but from a enjoyable point of view i personally would prefer to …

No posts have been made on this movie yet. Be the first to start talking about All is Lost!