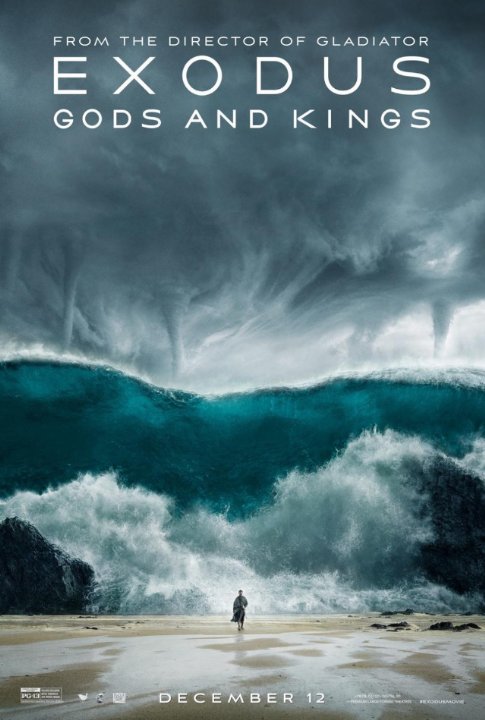 Plot: Follows the story of Moses - from being raised by the Pharaohs of Egypt to growing into his destiny to lead the Israelite slaves out Egypt. -- Chris Kavan

Exodus boasts too much logos and not enough pathos

Ridley Scott remains one of the best visual directors in the business but at this rate, he's at risk becoming the rich man's Michael Bay if he keeps on making good looking movies instead of films that are actually good. I actually liked Exodus: Gods and Kings better than I thought-especially after all the bad reviews-but the most shared criticism rings true here: It's comparatively hollow despite cranking up the spectacle and the histrionic acting. Everything's on autopilot and as wildly divergent as the script is from the traditiional story of Moses in the bible, it's surprisingly slow and sometimes even boring.
That much negativity being expressed already, I liked the action, the visuals, and thought the two lead performances from Christian Bale and Joel Edgerton were fine. Their …

not a bad as they say but not anywhere near great

a bigish movie based on the tale of moses
.at first when this started i thought it might be poor but its got better i got into it in the end. i think the critics might be being a little to harsh. though it is a big story to tell and if your going to do it you best do it well, and so i guess for that reason they are harsh as yes its not a great movie. but hey ive seen much worst.
my main gripe is arron paul is hardly in this. and christian bale who i think is one of the best actors working starts of a little out of place as moses but he wins me over by the end. but a better story and a better director would of helped.
scott for me is so over rated as a director who has a big attitude to match. all in all its nowhere near a great movie but its really not that bad. its ok/ish, worth …

I have a feeling that the Catholic Church has done quite a bit of lobbying in Hollywood, after noticing that their fanbase started to dwindle. First there was the biblical story "Noah" with the famous boat builder who started constructing a huge ark, insisted by "The guy upstairs", just so he and his family could withstand the announced tidal wave together with a pair of every animal species. And now they even convinced Ridley Scott to make a film of the incomparable epic story of Moses who guided his people through the desert to absolute freedom (It's clear he hasn't pointed out the right place, because they still haven't found the right spot). Ultimately, this film won't convert me (it didn't appeal to me either), but I …

No posts have been made on this movie yet. Be the first to start talking about Exodus: Gods and Kings!