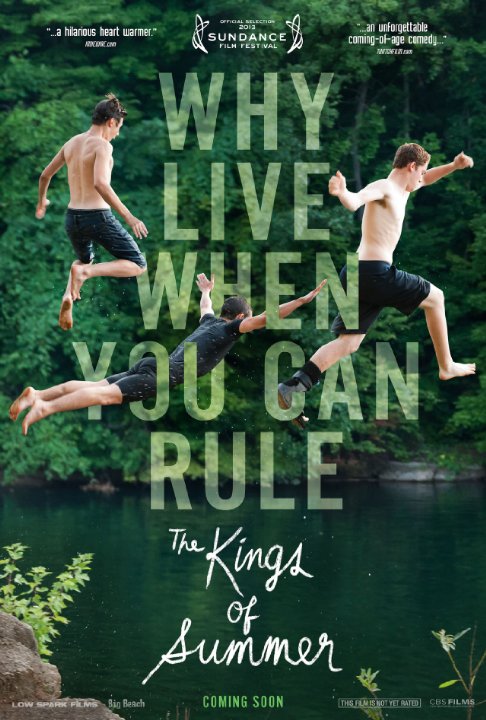 Plot: Three teens boys, fed up with their unhappy lives, decide to head off into the wilderness to build their own house and live on their own. -- Chris Kavan

I don't think it's possible for me to love this movie any more than I did. It made me laugh harder than any other coming-of-age indie film I've ever seen, while also standing as a portrait of the escape of youth.

'Kings of Summer' is a different breed of adolescent 'coming-of-age' film. The charm lies in it's offbeat nature, with an emphasis on quirky comedy and frank characters. It constantly serves up good irreverent humor. I laughed all throughout. The drama plays second fiddle, but is no less effective. I feel that the ending slides into predictable territory and is not as emotionally satifying as similar films I've seen. However, the feelings are genuine and it does earn a heartwarming moment or two. It is quite enjoyable to watch these boys have their fun in the woods. It's the ultimate summer camping fantasy that brings back memories of summertimes past.

Review: The Kings of Summer

There's something about coming-of-age films that just strike me as something special. When they're done well, obviously. I've seen three this year (Mud, The Way Way Back, and of course The Kings of Summer - I still need to see The Spectacular Now) and all of them are true gems. Fun, engaging, well-intentioned, and beautifully crafted. The Kings of Summer suffers a few flaws, but they're easy to overlook due to the display of excellent performances, clever writing, and a great sense of fun and freedom. The main issue I have with the film, however, is that many of its plot elements feel underdeveloped. That isn't to say that the film lacks effect in its most dramatic moments. It's just that the film, as a whole, feels rather light when the filmmakers are obviously trying to go for heavily …

The Kings of Summer

The Kings of Summer (2013) R Three teenage boys (Nick Robinson, Gabriel Basso, Moises Arias) decide to get away from their rather strange and controlling parents by running away to build a house in the middle of the woods. This is a great film for the summer. Itâs funny, moving and full of fine performances. While viewers will see this film for the supporting cast, which is full of great comedians like Nick Offerman and Megan Mullally, itâs the three lead boys (Nick Robinson, Gabriel Basso and Moises Arias) that make this film so exceptional and a joy to watch. Nick Robinson, playing the leader of the gang, Joe, is absolutely perfect in the role of a kid who is so tired of his life that he just wants to run away. Gabriel Basso does a terrific job of portraying Patrick, the …

No posts have been made on this movie yet. Be the first to start talking about Kings of Summer, The ( Toy's House )!