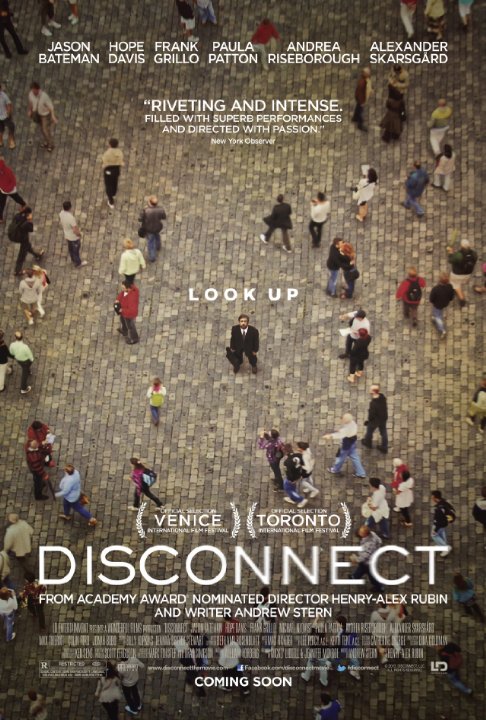 Plot: As the world becomes more connected digitally - do we lose human connection in the process? This series of interconnected stories concerns a lawyer who is more attached to his cell phone than his own family, a couple dealing with their secrets being exposed online, an ex-cop with a cyber-bullying son and a journalist looking for scoop found in a teen working on an adult internet site. -- Chris Kavan

A great movie with a subject that fits a modern society nowadays and really fascinated me. Because of my professional life I'm closely connected with the used themes and technologies, making it more enjoyable for me. At first I was expecting a boring movie about the contemporary information society with a lot of posturing and dialogues, so the entertainment value of this film would drop to absolute zero.

This was in retrospect a huge judgmental error. This was an intriguing movie with three story lines that eventually were subtly interwoven. The thread is a socially critical message with three examples of what dangers lurk in today's information technology : exploitation, internet fraud and cyber …

Rethink How You 'Connect'

'Disconnect' is an effective three story drama with a message. The multiple threads manage to coincide without any missteps in narrative. Each one is given equal screen time and reaching a deserved emotional climax. The runtime is surprisingly short for this type of film (under two hours). This provides no unnecessary elongated scenes. Every moment counts. Though, one of the three stories is stronger than the other two, in terms of dramatic weight. There is much to be said and learned from the experiences of these characters through their online interactions, but it's nothing that even the most unversed computer user couldn't understand. The emotional connect didn't come through for me until the finale. I felt each story ended perfectly for what they were building to. The rest …

Technological Thriller with a Message

Disconnect really takes compelling subject and gives us a powerful set of stories, interconnected, that really drives home the message. In this case, the concern is technology - technology that is supposed to make it easier than ever to connect with our fellow man but, in many cases, it has the exact opposite effect. Cyber-bullying, identity theft, pornography and just not connecting with your family - these are the pitfalls and perils of a 24-hour online world.

There are three main stories here: two friends play a prank on a fellow student that goes too far, a couple deal with the fallout of having their identity stolen and a reporter works on a story involving teens working on an adult website only to get too close to the subject. The dad of one of the cyber-bullying kids works as …

No posts have been made on this movie yet. Be the first to start talking about Disconnect!