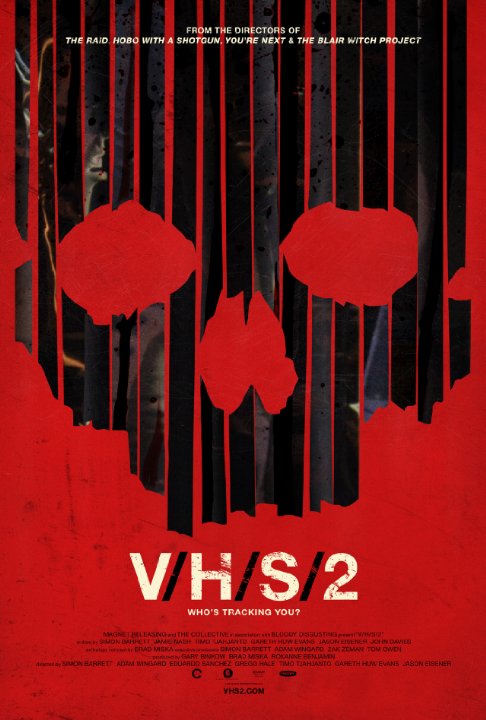 Plot: Two P.I.s, investigating the case of a missing student, finally break into his house and come across a group of VHS tapes - from the story of a robotic eye implant, a twist on the zombie genre, a cult interview that goes wrong and a slumber party invaded by aliens - the two finally come to the horrific realization of what happened. -- Chris Kavan

This movie is more good then the first one. I mean it's not as scary as the first one but it is really good and I can see a good future for horror films now.

While I don't know if I was supremely scared (other than some jump moments) at least v/h/s/2 brings something original to the table. I especially liked the first person POV zombie in the second short (A Ride in the Park) and the third story, Safe Haven, was full of just plain crazyness throughout. Adds a bit more humor and runs a bit smoother than the original - hopefully a third installment is forthcoming.

garth marenghi gone bad. worse, I meant. dark place was funny, it started like this, but vhs2 it s ridiculous for trying to be scary. fail!

A great continuation to the anthology found footage film from last year. 'V/H/S 2' is every bit as entertaining as it's predecessor. It may continue the same format, but there is no feeling of repeat here within the segments. The assemblage of the four new shorts is, well, shorter. Runtime is cut down a good twenty or so minutes and each story takes less time to set up. They waste no seconds in getting to the action. That's the main point where part 2 offers difference. Each of the five shorts in the first were given more set-up time and they all seemed to use that aspect to focus on 'old-fashoined' scares and closing with an ironic/unexpected twist. Here the focus seems to be on unique visuals and shock value, providing instances of creative camera placement and gore f/x. Every …

I thought last year's V/H/S was an experience of agony. I hated it rather thoroughly, and it bookmarked one of the rare occurrences in which I nearly fell asleep while watching a movie. I'll say right off the bat that V/H/S/2 is certainly better than the first film. It's cooler, it's funnier, it's more inventive, it's better paced, and above all it's scarier. Last year's mess was a 110+ minute long film containing five underwhelming short "horror" films that failed to raise a pulse. Its sequel, which consists of four longer but much more compelling horror shorts, is shorter and smoothly paced. The film is full of energy and the overall craftsmanship is quite impressive for its small budget.

Structurally, it's not much different than the first film. Two people go into a house for …

Though not without it's flaws, V/H/S/2 Is a wild improvement over it's predecessor. It's funnier, it's less juvenile, it's scarier, it's darker, and it's flat out more entertaining. Having only four shorts this time around, rather than 5 like the original. The four entries are longer and benefit for it. As with any anthology film it's uneven, but there's still much here to like. The first two short films are more darkly humorous. One involving a camera surgically implanted into a previously blind man's face has a few jump scares here and their, but suffers from rather poor acting and just isn't very scary at all. The second installment involving zombies in the woods is entertaining in it's original take of the genesis of a Zombie out break, all seen through a helmet cam. However, this …

Sequels Better Than the First by The Host

I thought certain parts of the first one were pretty good - so if this one is better, I will have to check it out. Anthology horror is more miss than hit recently, but here's hoping they finally got it right.

Hated the first one. Loved this one!! This film is a must-see. I'm serious.