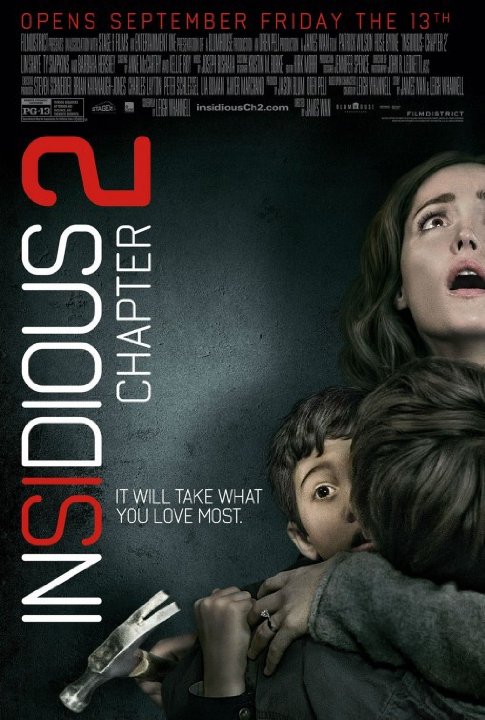 Plot: The Lambert family needs to figure out why their family is tied to the deadly spirit world and it involves delving in a dark family secret but it must be done before they are all claimed. -- Chris Kavan

While I didn't find it quite as effective as the original Insidious - for a horror franchise (and since they've already announced a thrid film, I can call it that), it's one of the better ones out there. Truly unnerving in parts, James Wan knows how to craft a good scare - the story this time is a bit muddled (you're essentially following two separate stories that come together in the end) but if you're looking for a decent horror film, it's a good choice.

The Lambert family needs to figure out why their family is tied to the deadly spirit world and it involves delving in a dark family secret but it must be done before they are all claimed. This movie has some scary parts in it but the director of the movie but all of hes scares in the conjuring.

James Wan has really been on a role with Insidious, The Conjuring, and now Insidious Chapter 2. He still has a long way to go before he can be titled a master of horror, but he certainly shows a great amount of promise. Chapter 2 is a very solid sequel to the original that many found terrifying, but that I found to be a huge disappointment. This time around there are far more perfectly timed and jarring scares that increases the tension as some truly will take you off guard. Thus there's a feeling that at any moment some ghastly apparition could make an appearance. Also, while Wan borrows heavily from 'The Shining', 'Poltergeist', and even 'Psycho', he has a way of making it his own. Unfortunately, it's still quite derivative. Wan also needs to work on his finales, which are …

Insidious scared the crap out of me. Back in 2011 when I left Insidious' big screening room, it struck me that James Wan (who made this year's fantastic The Conjuring. And Dead Silence...) is a true talent. He understands tension - what creates it and how to build it. He earns his scares. He establishes a dreading atmosphere that oozes with grueling horror and intensity. Insidious: Chapter 2 is his latest work, and I really don't know what to call it. It's something else.

I'm not exaggerating when I say that James Wan's Insidious: Chapter 2 is one of the strangest things I've ever had the pleasure of watching. It's not a terrifically good or well crafted film - it's flawed up the rear-end - but it's for sure an entertaining one. It's weird, silly, sometimes terrifying, hilarious …

'Insidious: Chapter 2' is easily one of the best horror sequels I've seen in a long time. A true continuation of the first and not just a re-hash of old for the sake of making money (like most sequels these days). The story continues onward from where we left off, provides a prequel segment, adds some interesting mythology, and even revisits scenes from the first from a different perspective. Because of this, it's crucial that you watch 'Insidious' beforehand. This is my favorite aspect of the film, the way in which the story is so tightly connected. It made both films feel like two halves of a whole. The only drawback to the story is that the plot becomes heavy with interconnected moments and many scenes that switch back and forth between places and time periods, providing very …

The trailer is pretty cool. I'm curious to see how they're going to make this film work following that cool twist at the end of the first one. This is a pretty big year for James Wan, with this and The Conjuring (which looks awesome) both coming out this year and his shot with Fast and Furious 7. He deserves it. I think the guy's talented.