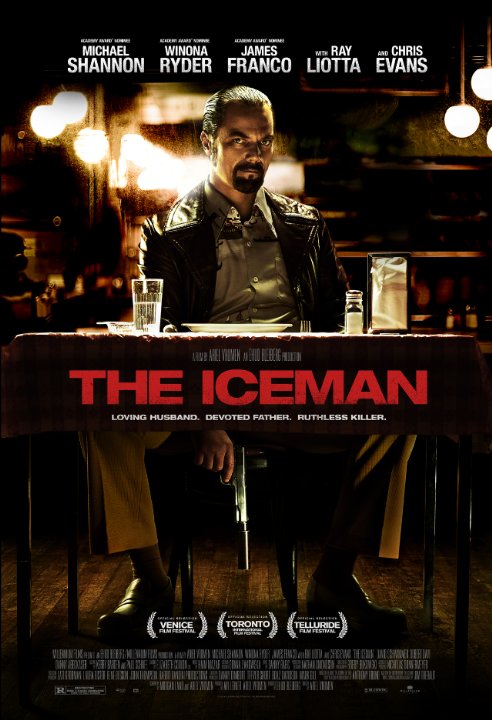 Plot: Richard Kuklinski led a double life - on one hand he was a loving family man - on the other, a cold-blooded hitman - this is his story. -- Chris Kavan

Michael Shannon is the Iceman. Such a great performance! The movie is good, well paced, good script, good cast.

Got to love Michael Shannon - that look in his eyes - it sends chills down the spine. Portraying the real-life story of Richard Kuklinski - one of the most notorious contract killers in history - is fascinating. Not just as the cold-blooded killer, but also as the family man - he seems so normal, but with a simmering rage underneath and an icy business-like demeanor in killing people for money. An excellent supporting cast (Winona Ryder, Chris Evans, James Franco, Ray Liotta and Stephen Dorff, amongst others) also lends it some credence. Great crime drama with plenty of meat on the bone to sink your teeth into.

If The Iceman has a small failing, it's that it opens rather slowly. Otherwise, the film is engaging, rich in characterizations, and admirable for Michael Shannon's terrifying portrayal of Richard Kuklinski, who was a loving father and husband, while on the side a no-bullshit hitman. Director Ariel Vromen brings the right balance to Kuklinski's two-sided life. None of them feel inferior to the other. They're both dramatically compelling in their own way, and in the end, when both sides conclude, both sides are equally satisfying. 3/4

Even if The Iceman skims through a lot of the important true events, this is completely Michael Shannon's show. Giving another great performance, and probably one of his best. Winona Ryder is also great as Kuklinksi's loving, if scared, wife. But again, this film is worth watching if only for Shannon's flawless performance as 'The Iceman', never striking a false note, frightening, oddly sympathetic, and yet still cold blooded. The film makers should have delved more into Kuklinski's background, instead of just a blink and you'll miss it flashback. Not that this man deserves sympathy, but having researched the case and his upbringing, it would have added a little more meat to the proceedings. The supporting players also give great performances, especially Chris Evans, Ray …

No posts have been made on this movie yet. Be the first to start talking about The Iceman!