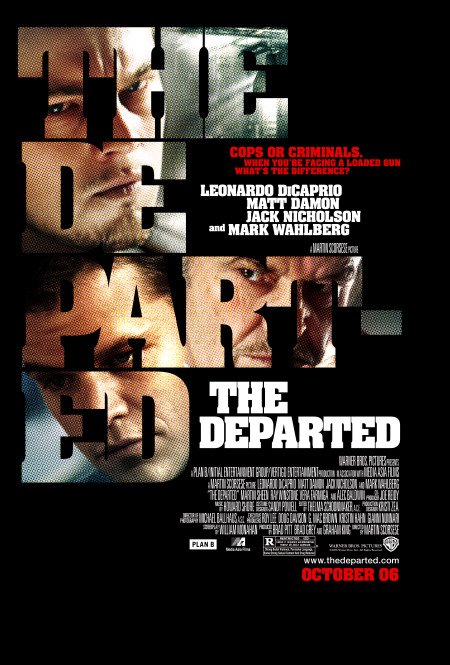 Plot: Two detectives who go through the same training, and perform well are on opposite sides of the war between a big wig Irish crime boss. They both struggle to figure out who the mole is.

It took time for film legend Martin Scorsese to grab Oscar gold, and this film was well worth the wait.

Two detectives who go through the same training, and perform well are on opposite sides of the war between a big wig Irish crime boss. They both struggle to figure out who the mole is. Leonardo DiCaprio, Matt Damon, Jack Nicholson, are the best parts in the movie and that't all you need to hear. Martin Scorsese is the greatest director of all time.

This is a really enjoyable movie. plenty of mystery, suspense, a good storyline that keeps you engaged all the way.

"The Departed" by Yojimbo

Leonardo DiCaprio and Matt Damon are two cops; one is honest and taking part in appalling crimes while working undercover, the other corrupt acting under the facade of respectability. Soon it becomes necessary for them to discover each other's identity in a cat and mouse game against the clock. Scorsese's pedigree as a director shines through as this is far from the usual clunky Hollywood remake we've all come to revile. In fact, the spirit of the original is so apparent that it feels far more like the kind of Asian cinema influenced picture you'd expect from Tarantino than a Scorsese, and for that reason, anyone expecting the kind of intensity and provocativeness of Goodfellas or Taxi Driver may be disappointed. The cast are uniformly solid (although the kind of heavyweight performance …

The worst film from Scorcese in what has been a distinguished career, not least because it belongs to a genre in which he usually excelled. It's tempting to think how this would have been viewed had it not been a remake - a comparison with the original film does it no favours.

The scenery chewing actors help sink the enterprise, especially Nicholson who seems to think it appropriate to reprise his role as The Joker from Batman. And then there is the ludicrous ending, all the more so when compared to the slick coherence of Andy Lau's film. But nowhere is the Hollywood thinking more apparent then in the way the role of the psychologist has changed. In the first film she was a neutral character, but now she has to be the 'love interest'. The title of the film could easily be an ironic …

Scorsese at his pinnacle!!!!

We all know that Scorsese's mobster films really put him on the map (Goodfellas, Casino). But those were Italian mob pictures, while this, on the other hand, is an Irish mob picture, which ( i think) rivals Goodfellas. The plot is such a work of art just in itself, its hard to take in everything that makes this movie so good with just one viewing. We see two young men, who are in many ways, almost the same person. One has a relatively easy time going through his life and career as a Boston State Police Homicide Detective. The other has a much tougher time with his own life as well as the work he does for the Boston P.D. as an undercover agent. O' Sullivan (Matt Damon) has everything pretty much handed to him in life because the man he really answers to, Francis Costello (Jack …

No posts have been made on this movie yet. Be the first to start talking about The Departed!