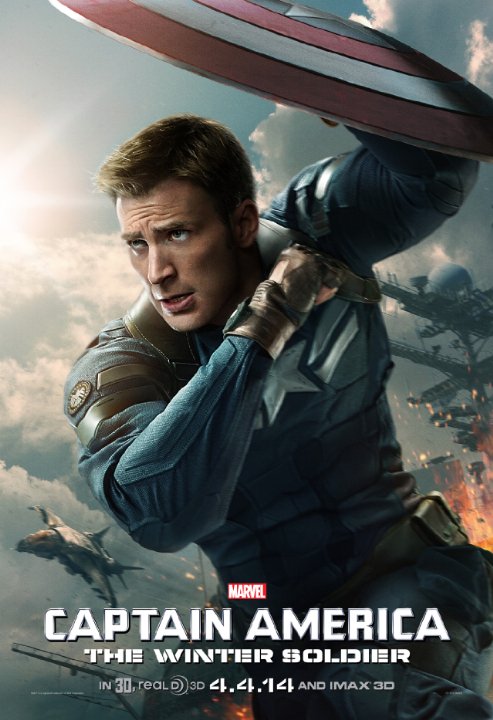 Plot: Stever Rogers aka Captain America, continues to adapt to the modern world while working with S.H.I.E.L.D but an old friend is about to turn up: his former partner-in-arms James 'Bucky' Barnes resurfaces - but he's been programmed as a Russian assassin known as The Winter Soldier. -- Chris Kavan

Offering thrilling action and raw glimpses into the heart of its title character, "The Winter Soldier" stands tall as the MCU's greatest achievement

Captain America: The Winter Soldier is absolutely incredible. Best action in a Marvel solo movie and perhaps the best of them all. Loved the conspiracy angle as well. Very smart and well acted.

Definitely one of the top Marvel series films. This one has a great story, acting, solid drama and excellent action. Really no complaints at all. In my Top 3 for sure.

When Nick Fury discovers that S.H.I.E.L.D. has been infiltrated to the highest level by Hydra, he turns to the only man he can trust to re-establish the integrity of the organisation.

This sequel to the solid but unspectacular Captain America has a plot that concerns itself with far more contemporary themes and political issues, and strangely that is why it is so effective. Steve Rogers does his best Jason Bourne impersonation as he becomes the hunted outlaw outside of a political system that has become corrupted by fear-mongering, mass surveillance and authoritarian curbs on civil liberty in the name of âthe war against terrorâ. Of course having just arrived in our time, Captain Americaâs idealism for the values forged during the wartime fight against fascism are still intact …

Captain america gets his own movie where he finds himself hunted by shield and sets about dethroning the villains and restoring order
I dont understand the praise for this movie. i found it really boring predictable and silly. i dont undersatnd why movies like the expendibles get put down yet this movie is praised when the only real difference is the superhero angle., This is movie is nowhere near as fun and hasn't got the actors and a is lot sillier. but i guess if your a fan of the whole super hero universe then it doesn't matter. to me i was so bored , i didn't like the characters and the direction/camera work .
i liked the avengers i can see the appeal of that movie. and iron man is fun cause of robert downeys charisma but this movie lacks any of that appeal. its like a tv …

While there is no shortage of spectacle with Captain America: Winter Soldier - compared to the rest of the the Marvel films, it seems much more grounded. The story - a mix of modern-day government interference (S.H.I.E.L.D. is the like the NSA kicked up to 11 in the movie) but still leading back the Captain's history - that is WWII and Hydra. Yes, there is action, but the story is a lot deeper than I would have expected from a super hero movie and that's a step in the right direction.

We open on a secret mission to liberate a SHIELD ship (operating outside its parameters) from a group of terrorists. Captain America is along, as well as the Black Widow - Chris Evans and Scarlett Johansson reprise their roles - on the orders from Nick Fury (Samuel L. Jackson). While the Captain is busy …

No posts have been made on this movie yet. Be the first to start talking about Captain America: The Winter Soldier!