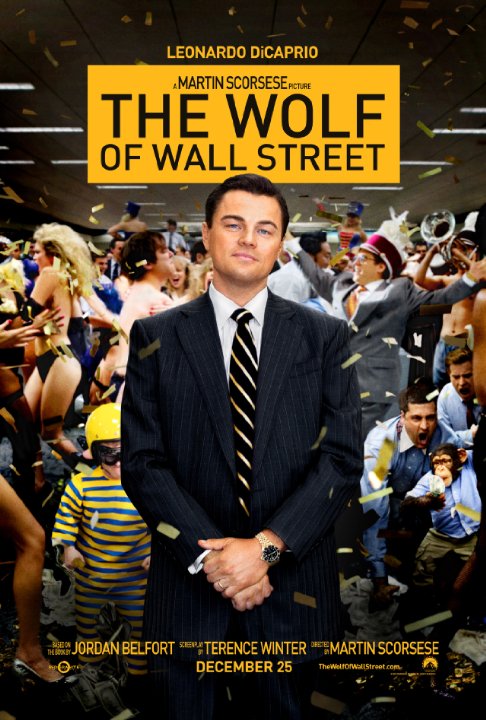 Plot: A Wall Street stockbroker lives the high life with his likewise wealthy buddies - but the net is closing in around him. But even as the feds close in on one of the largest securities fraud cases in the corporate banking world, he refuses to cooperate in any way. -- Chris Kavan

Perfectly representing themes of greed, lust, and lack of moderation, "The Wolf of Wall Street" features one of DiCaprio's most unhinged performances.

Your typical "how much excess can we cram into one sitting" type film. The movie is all about non stop drug use, cursing, theft and a criminal lifestyle purportedly portraying that of the Wall Street stockbrokers during the 80's. The movie was kept on track by DiCaprio's vigorous performance, but the end result is still predictable. I knew exactly what would happen in every scene. It really is an exercise in how much debauchery can we show all at once.

"The Wolf Of Wall Street" by Yojimbo

Stockbroker Jordan Belfort climbs to the top of the financial tree with little regard for ethics or law in this true life story of the real face of the "American Dream". The Wolf Of Wall Street courts comparisons with Goodfellas in both style and substance, but compared to the astonishing rise and rise of Belfort, Henry Hill and company look like seedy, small-timer losers and this is why the film both succeeds and fails simultaneously. In Goodfellas, the consequences of their sociopathic actions always surrounds them; even at their best, Scorsese never lets you forget that these "goodfellas" are at their core nasty, self-serving, vicious thugs. The Wolf Of Wall Street on the other hand with its hilarious excess and supremely charismatic and watchable performance by DiCaprio can seem like …

The Wolf of Wall Street review

A dark comedy on Wall Street players instead of the usual gangsters. It starts of slow then picks up in the middle and just fizzles towards the end. Jordan Belfort's character reminded me of Tony Montana from Scarface. Everything in excess and coupled with a funny right hand man. The cast shines and Leonardo DiCaprio was spectacular in all aspects. He was very convincing and really shows a total transformation of a mere applicant in Wall Street to a very successful conniving drug/sex addict. It was surprising how most part of the film was funny and in the near conclusion with speech it wasn't that heartfelt and one cannot sympathize for Belfort's actions. Soundtrack, settings and direction were masterful coming from Scorsese. Only minor faults this reviewer noticed were the …

The Wolf of Wall Street doesn't beat around the bush. It really doesn't.
If there is one thing I hate in a biopic, it's when the director or production team choose sides with the main character, whether it be a good or bad or normal one or whatever. Trying to show something exactly as it happened without leaning a little one way or another is very difficult, I understand that, but when the right people with the right goals are put on the right projects, this film happens.

Martin Scorsese must be high again, because the film is a non-stop roller coaster of excellence. Not a single boring moment was to be found in this entire film, because of its unique style and perfect (let me type it again) perfect tone to underline what I love about Scorsese and his filmmaking style and movies and …

No posts have been made on this movie yet. Be the first to start talking about The Wolf of Wall Street!