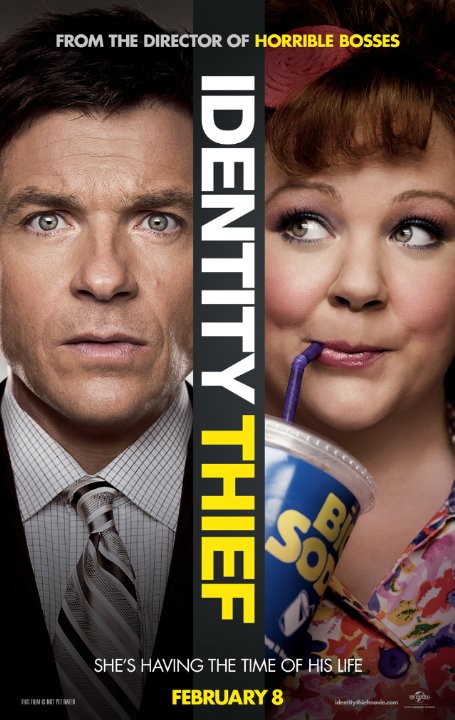 Plot: The mild-mannered "Sandy" has his identity absconded by a low-life woman and vows to track down the person who has destroyed his credit life. -- Chris Kavan

The story is about This mild-mannered "Sandy" has his identity absconded by a low-life woman and vows to track down the person who has destroyed his credit life. this movie has some funny parts but the rest of the movie was a bit weak.

I found a few laughs placed sporadically throughout. Most of them were chuckles originating from some random clever dialogue (assumed improv) from Melissa McCarthy. The film has an overall feeling of average in every aspect. What sets my rating below average is the lame writing of the story and characters. An uninteresting, one directional plot and mean characters that don't earn their sentiment in the final act made me loose interest as it progressed. And, of course, the lack of truly good laughs.

Sandy Bigelow Patterson (Jason Bateman) is a mild manner accountant who always does the right thing, saving, taking care of his family, and being a responsible worker while Melissa McCarthy plays the scam artist who steals people's identities, running up huge tabs on alcohol, jewelry, and cosmetics. In this movie she tricks Sandy into giving her his vital information and then steals his identity, which in return ruin his credit and ends up costing him a high paying job. With the police unable to do anything Sandy decides to go get the woman who calls herself Diana himself. Heâs given a week to go to Florida to find his thief, and then bring her back to the police. Finding the woman is easy enough, but trying to subdue her is the difficult part. Sheâs a violent ruthless woman who …

Sandy Patterson (Jason Bateman) gives his information to Diana (Melissa McCarthy). Diana utilizes the information and uses credit cards under Sandy's name. The idea of an employed guy gives his whole private information to a total stranger on a phone was just too unbelievable. Somebody run over and can still walk was just ludicrous. A decent comedy that has its moments some felt forced though. The drama and plot of the convict wanting to kill her just confuses, which adds to another genre. Identity Thief boasts the talents of a Melissa McCarthy but fails to bring in the heart of story since from the beginning, her character was too ruthless and just impossible to reform just by hearing the kids of Sandy. It's not enough reason to change her criminal acts all of a sudden.

Identity Thief (2013) Sandy Patterson (Jason Bateman) discovers that his identity has been stolen, and itâs causing him a world of problems. Sandy finds out that the identity thief is a woman named Diana (Melissa McCarthy) and that she is living large in another state. So, Sandy goes on a road trip to hunt down Diana and bring her back to clear his name. This film just isn't funny, and itâs a film that desperately wants you to like the two main characters, but you never really connect to either of them. The first twenty minutes, and yes it takes that long to set up the premise, feel more like a drama or a horror film, as it is really scary how quickly Sandyâs identity is stolen and how quickly his life gets torn to shreds. The plot is full of holes the size of Montana, and …

No posts have been made on this movie yet. Be the first to start talking about Identity Thief!