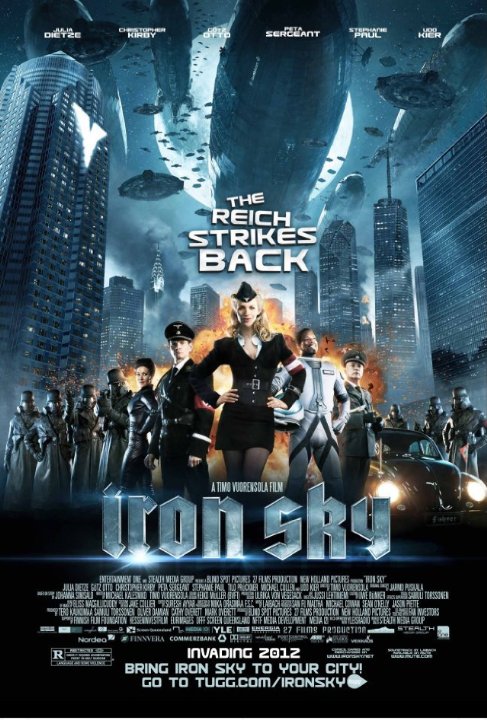 Plot: In 1945 the Nazis set up a secret base on the moon. In 2018, they're coming back to Earth to finish their plans of world domination. -- Chris Kavan

I can't call Iron Sky a "good" movie in the sense of the word, but I can call it a very fun movie. Moon Nazis launching an space zeppelin attack against Sarah Palin and her secret space weapon? This is the most off-the-wall movie of 2012 (thus far) a crazy, bizarre film that is so bad its good.

Fun movie. Lots of things do not add up and are completely fantasised with a large cop of green tea.... This is what the movie makes a bit special and fun to watch.

Comedy about Nazis invading earth from moon. Sounds pretty nice, at least ok. Well, it isnt. At least it isnt for me. One thing that annoys me not just in this one but in many modern sf films is that they are uglier than old star wars. They look like computer games. Than we have story that isnt well done , i would say they were lazy. And than we have usual political jokes that are completely forced and also pretty stupid. Characters are ridiculous because they arent real at all, they seem to be copy of copy of copy... There are some positive things. I laughed two or three times. I enjoy watching space at cinema. And ... ...well - nothing more. Not even bad film but worse, waste of money and time.

As pathetic as it sounds.

Space Nazis... Yup. And I actually walked into this with good expectations.
I was convinced that this was going to be a movie that was so bad that it would become good. I was wrong. It was so bad that, that was the end of it and nothing changed.
Quick recap: Neo-Nazis on the moon decide to invade earth (of course) for no reason, skip the entire rest of the world (of course), go straight to America (of course), where Sarah Palin is president (*facepalm*).
It parodies, it bores, it tries to justify national socialism, it makes you frustrated just to continue watching.
What's extremely irritating to me is the ending. Everyone of course is happy, but the Nazis didn't exactly lose. The main characters (a black man they turned albino and is now perfectly black again, and an annoying Nazi …

An enclave of the German reich of WWII entrenched on the dark side of the moon decide to reclaim the Earth after discovering mobile phone technology in the hands of a PR stunt moon landing. I saw the trailers for this film a few years ago now and the whole idea of Independence Day with Nazis seemed like a dream come true. Unfortunately, this independent film was clearly desperate for financial backing and made the appropriate compromises to get it. It's actually quite annoying that the script screams the word "REWRITES" because there are moments of absolute genius. The US president embracing Nazi propaganda for one, the Flash Gordon homage as a fleet of unarmed "commercial satellites" wage war on a spaceship clearly designed by a man with the "smallest penis in the universe" for another. …

No posts have been made on this movie yet. Be the first to start talking about Iron Sky!