Trouble with the Curve Movie Information 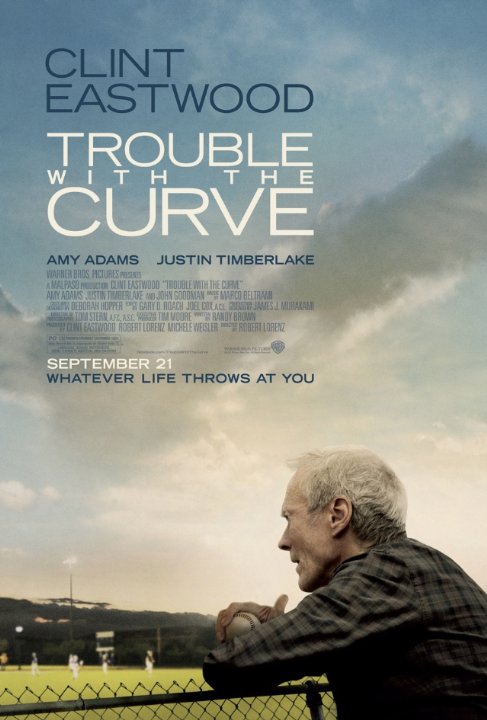 Plot: Gus, an aging baseballs scout who relies on his instinct rather than technology to recruit, is reaching the end of the line. He decides to take on last recruiting trip and hopes that bringing along his daughter will help their strained relationship. Meanwhile, up-and-coming recruiter Johnny Flanagan no only has his sights set on the best talent, but Gus' daughter as well. -- Chris Kavan

Great actors in a light-drama film.

What are you all staring at? I'm not a pole dancer.

Clint Eastwood (Gus) as a baseball scout. A moody old grump who seemingly only has eyes for baseball. He is getting older and his eyes are getting dramatically worse. So his best friend (nice guest star by John Goodman) asks Gus's daughter to assist her father. The new generation in the club where Gus is under contract, tries to relieve Gus. Matthew Lillard, of course, plays the role of the annoying smart ass. I don't know why, but this guy just has the charisma to put down such an annoying brat
Despite the enormous accumulation of cliches and predictable courses, this movie could hold my attention until the end and I found it an enjoyable movie to watch. The poor father-daughter relationship, which is actually the main subject in …

A feel good movie for any person sports fan or not

Clint Eastwood plays Gus Lobel, a veteran baseball talent scout for the Atlanta Braves who refuses to rely on computer stats to judge new talent relying instead on good old fashioned gut work, such as hearing the sound of a ball hitting a glove and a ball hitting a bat. Unfortunately his eyesight is failing and this is Gus' last chance to scout a hotshot prospect before the team offers him retirement.

Gus's friend and boss, played by John Goodman, realizing that something's up with Gus, recruits his daughter Mickey (Amy Adams), a career oriented attorney with eyes on a promotion to partner, to accompany Gus on the trip. (For those wondering, Gus named his daughter after Mickey Mantle.) Mickey has her own personal issues and wants closure from a rocky past stemming from her dad sending …

'Trouble With The Curve' Movie Review

Itâs not a secret that Clint Eastwood has been making a (new) name for himself lately, but whether you enjoy ALL his performances or just the non-political ones, thereâs no denying that heâs his usual talented self in âTrouble With the Curveâ â or, as it could also be named: âA Tale of Three Toolsâ.

THE GOOD: Gus Lobel (Eastwood) is a baseball scout for the Atlanta Braves and likes to play things âold-schoolâ â meaning he depends on his eyes to judge a playerâs potential, and not some computer program. Gus is really starting to feel his age, and has recently been informed by his eye doctor that the one thing he relies on for his job â his vision â is rapidly deteriorating. Pair this with the fact that an up and coming brown-noser in the office (Tool …

No posts have been made on this movie yet. Be the first to start talking about Trouble with the Curve!