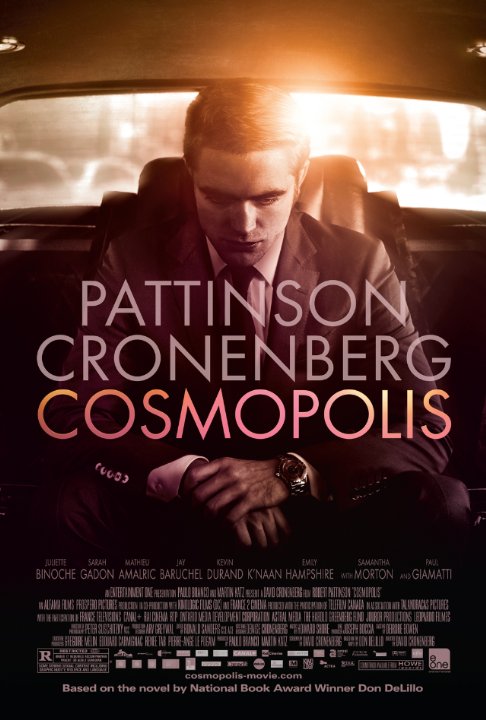 Plot: A look into one 24-hour period in the life of a young multimillionaire as he takes a wild, reckless journey across Manhattan. -- Chris Kavan

There's a lot going on, but I'm not sure there is a lot happening. I love David Cronenberg and I'm sure there is deeper meaning to be found here, but I can't say I was impressed here. Still, at least Pattinson proved he can do something other than Twilight and the story (while all over the place) offers some unique insights into everything from money to power to love to violence - albeit in a roundabout way. I think you have to be in the right frame of mind to like this and maybe, on another day, I might rate this higher.

A corporate executive travels the city in search of a haircut while the fabric of capitalist society disintegrates around him. David Cronenberg has always been a purveyor of the existential crisis and here he turns his attention to global capitalism in this satire of the new corporate aristocracy. "Satire" is perhaps a strong word as the film is really just a rather heavy handed analogy of neoliberalism as a stone faced Pattinson travels through the city in his untouchable corporate bubble while the "little people" tear themselves apart. It's a subject I personally find very interesting but I found the forced dialogue, affected performances and drama-devoid plot unbearably pretentious and dull. Cronenberg is clearly attempting a financial "Crash", but without any human connections at all …

Two quotes that almost symbolizes the premise of the film:"I'm looking for more." and "Life is... too contemporary." Definitely acquired taste and fans of the director's style. It's one of the best paced as well. A very wealthy Eric Packer (Robert Pattinson) is moving around Manhattan to have a haircut with a high tech limousine and bodyguard. Definitely the director's well paced film with subtle touches of skillful directing. Communication is the key to enjoying this film, the rest would follow, which you can feel in every excellently executed movie. Surprisingly you see a different Pattinson, sincere and maddening which fits the role. A few scene stealing moments were the conversations in the final scene with Giamatti and with Samantha Morton (Vija, Ericâs chief …

No posts have been made on this movie yet. Be the first to start talking about Cosmopolis!