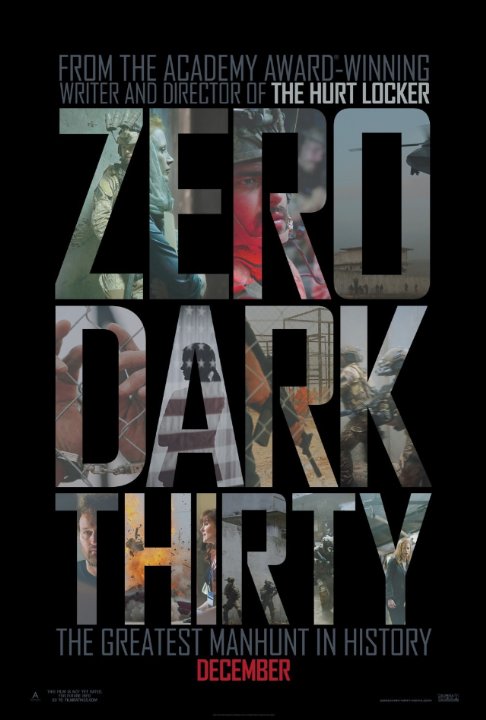 Plot: Follow CIA agent Maya in her decade-long quest to hunt down Osama Bin Laden. The hard work, determination and sacrifice involved leads directly to the raid on a compound by Seal Team 6 in May of 2011. -- Chris Kavan

A full scope docudrama that focuses on the search for Osama bin Laden that spanned almost 10 years and 2 presidential administrations. Kathryn Bigelow's direction is flawless as her film explores the events of the worldwide manhunt, its urgency, and its ethical ambiguities.

the same director who beat avatar at the Oscars. this movie had some really good acting but the rest of the film was very forgettable.

Zero Dark Thirty is the true life story centred around the obsessive CIA analyst who was most responsible for locating Osama Bin Laden. Katheryn Bigelow's Oscar winner is very much like a combination of her previous film The Hurt Locker and The Wire. The bulk of the film is made up of cold-war style spy-duggery as telephones are tapped and suspects trailed to the door of America's most wanted. In fact she does not shy away from the dubious tactics employed by the US in extracting information from its persons of interest, although one would have to say that although the film does not condone these actions, it falls short of condemning them as well. This information gathering section of the film can feel a little dry and over long because of the lack of human drama, but it's all leading up …

The ending is not worth the wait.

What exactly is so great about this again?

Oh yeah, they got Osama in the end.
First of all, Zero Dark Thirty is not about the manhunt for Osama Bin Laden. It's about empty conversations and atrocious torture scenes.
Kathryn Bigelow (the first woman to win an Oscar for Best Directing) directed one of my favorite films of 2009, the Hurt Locker. Filled with stunning acting and direction, an airtight script and a general interesting atmosphere, it was much more superior to her follow-up.
In search of information about the making of the film, I came across the fact that Bin Laden was shot and killed during the making of Zero Dark Thirty. And it really shows.
The pacing is completely off by miles. While other true stories had me hooked from beginning to end and had me interested, I …

An important film. Subtly brilliant and perfectly thrilling, Zero Dark Thirty is beautifully paced; at a near 3 hour running time, the film moves along nicely, never dragging. Mark Boal wrote a terrific script; it's dense and might include a little too much information, but I felt like that gave the film another level of authenticity. The performances are flawless. Jessica Chastain is incredible; she plays the character wonderfully and her performance is worthy of every praise it's getting. The supporting cast is perfect as well, Jason Clarke stood out to me. Kathryn Bigelow's direction is what really makes this film special though. Her vision and attention to detail is admirable and it truly elevates the experience. The film builds to a thrilling ending that ranks among the most intense …

I'm very much looking forward to watching this - coming up on the 10th - I though the Hurt Locker was terrific and am anticipating this to be one of the best films of the year.

Finally saw it. It's terrific. Very suspenseful and interesting, and Jessica Chastain is great. I'm really happy for Kathryn Bigelow. I'm excited to see what she and Mark Boal are gonna do next (if they work together again).