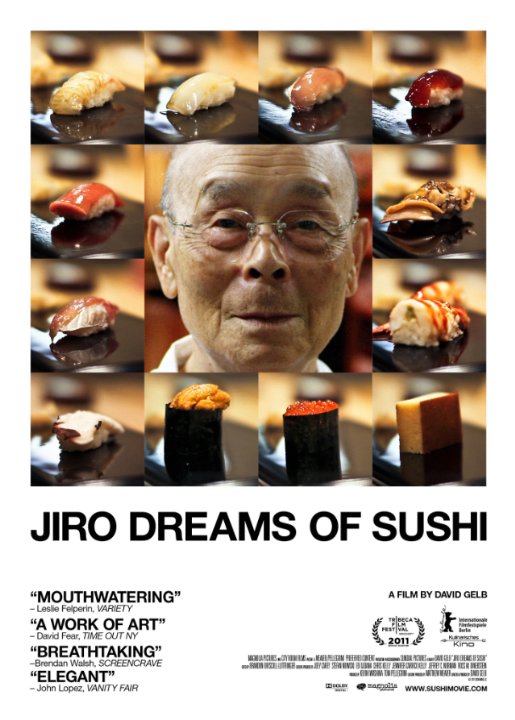 Plot: 85-year-old sushi master Jiro Ono works in the basement of a Tokyo office building, meticulously crafting the perfect pieces to present at his restaurant Sukiyabashi Jiro. The documentary explores the relationship between him and his son (and sushi heir) Yoshikazu, as well as his life-long quest to develop the perfect piece of sushi. -- Chris Kavan

This movie is phenomenal and a must-see for anybody pursuing a life-long career. I picked this up because I love sushi and I was expecting to see some cool stuff about this restaurant in Japan. What I got was a movie filled with motivation and sincerity towards the meaning of work and life. What people should take from this movie is that, no matter what your career is, make it your passion and you will find the meaning to you job. Always do your best and take pride in what you do and greatness will follow. This is an amazing film that everybody should see. P.S.- As with all foreign films, I suggest subtitles over dubbing.

"Always look ahead and above yourself. Always try to improve upon yourself. Always strive to elevate your craft." One of many wise quotes from Jiro Ono. The documentary focuses on a masterful sushi restaurant owner/chef named Jiro and his eldest son Yoshikazu. As a self-confessed sushi lover and sucker for well directed documentaries, this reviewer had to see this. It shows the history of Jiro's family history and search for perfection of his craft. The details of Jiro's method of managing the restaurant were so detailed and highly regarded by critics which instills customer satisfaction. One sample would be creating the sushi depending on the gender so the orders would be synchronized and positioning it to left or right handed customers. The music was elegant which matches the …

No posts have been made on this movie yet. Be the first to start talking about Jiro Dreams of Sushi!