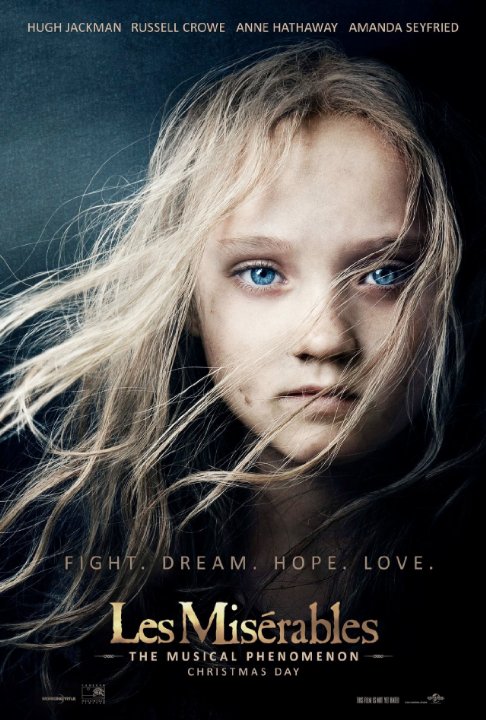 Plot: Based on Victor Hugo's classic novel-turned-musical - paroled prisoner Jean Valjean (Hugh Jackman) seeks redemption and a new life, and so breaks his parole. Set Amidst the French Revolution, he is pursued by Inspector Javert (Russell Crowe) and has the chance to change the fortunes in the life of Fantine (Anne Hathaway) and her daughter Cosette (Amanda Seyfried). -- Chris Kavan

The cast is (mostly) superb in this compelling adaptation of the hit musical.

Well, there's two hours of my life I'll never get back...Good god, they never stopped singing. It was maddening. Honestly, not everything needs to by sung, dialogue can get a point across just the same and it's usually a lot less irritating. That being said, some of the songs were pretty damn catchy so...I don't know. I still wouldn't watch it again.

okay this movie has a lot of singing it and I mean a lot.this has good acting and the actors who was sining can really sing.

I really didn't like this film much at all, honestly. The film is much too Broadway and not enough like a movie musical. I hated Tom Hooper's direction, and while I respect the ambition, I would have preferred to see the musical version of this story told in a much different way. There is NO dialogue in film, almost none at all; every conversation and thought was sung, as it would have been on stage...that it the major reason why Les Miserables didn't work for me. This film is like watching the actual Broadway production on tape, songs included. For die-hard fans of the musical, that's great, but for others who just love the story, or even those that love films, this adaptation of Les Miserables disappoints. By including every song from the musical, it included the not-so-great songs as …

Now we see a good movie with powerhouse cast.

After breaking his parole, Jean Valjean (Hugh Jackman) becomes a father to a factory worker's daughter, Cosette (Amanda Seyfried). He cares for her as he promised to her mother, Fantine (Anne Hathaway), and at the same time hides from Inspector Javert (Russell Crowe).

I love musicals, that is why when this movie was released, I immediately went to a movie house to watch. I love Tom Hooper's previous film "The King's Speech" which added excitement to me watching this film. I really do appreciate Hooper's style, I saw brilliancy on his techniques and how he managed to make every scene remarkable, that is why I really don't get why other people seem to hate him.

Moving on, of course, we can not deny the fact that this is one film where a dream cast ACTUALLY performed at their …

Okay.. So I had mixed feelings going into this movie... The version with Liam Neeson and Geoffrey Rush is one of my all-time fave movies.. I watch it every time it comes on.. So I was very leery of watching the musical version.. Because my idea of a good musical is Grease and Rocky Horror Picture Show... And even the recent Rock of Ages was entertaining... But I am a huge Russell Crowe fan and have gotten to like most movies that Hugh Jackman has starred in.... So I bought it and watched it... It really surprised me.. Anne Hathaway's performance was outstanding (albeit very short).. Her singing as well as Amanda Seyfried was by far the best.. Hugh Jackman carried the movie though.. His performance was outstanding and his singing was bearable... Russell Crowe was the disappointment and …

I know the music - but have never seen this on stage. Given the huge buzz surrounding this film, I will have to watch it. I don't have a problem with musicals in general, so I'm interested to see how they incorporate it into film format.

I am not much for live theatre, so I have managed to go through life without seeing this one. I am very excited to see this in movie form. It is an epic book/play, it should be a great movie. Probably not better than either the book/play.