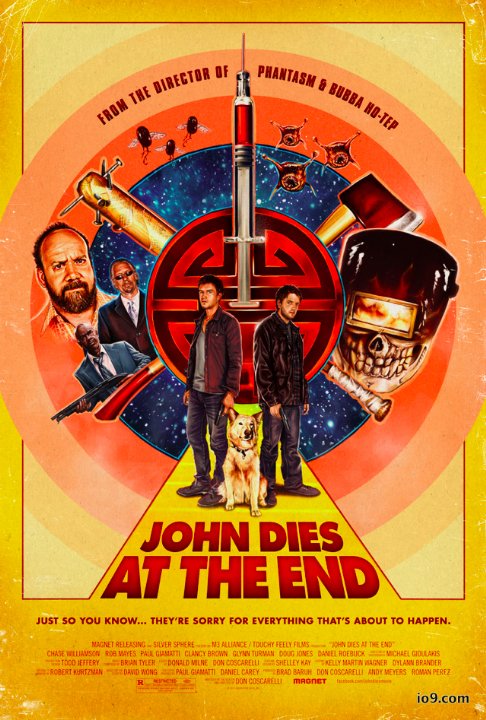 Plot: A pair of college drop outs is all that stands in the way of an other-worldly invasion when a new drug hits the streets. It does not end well. -- Chris Kavan

If you combined Naked Lunch with Hitchhiker's Guide to the Galaxy, you would have this film -which is as bizarre as it is entertaining and if you can wrap your head around the complete absurdity of things like talking to dead people with bratwurst, alternate dimensions filled with naked people and a dog playing a major part in the plot - well, then this movie is for you! Just go with the flow - it's mostly worth the effort.

This is one of those movies that feels like it's trying to be bizarre just for the sake of being bizarre. Random moments of weird special effects and gore populate this odd, nonsensical tale. It would be a mildly fun time if there would have been more humor and at least a little cohesiveness to the story. About halfway into the running time I found it hard to follow, even with constant exposition from various characters. I give it points for effort and creativity.

I don't really know what to make of John Dies at the End and, I'm guessing, most audiences won't either. While it veers too far, at times, into absurdity and plotlessness, a lot of what unfolds is a pretty linear, albeit very strange, mixture of sci-fi and horror. It reminds me of a darker and more R-rated Hitchhiker's Guide to the Galaxy and, for the most part, I was transfixed. The cast all seems committed and disappears into their creative roles and the film actually boasts some inspired special effects from the Sam Raimi school of horror films. I'm not sure if I would recommend it to everyone, but for those who love horror comedies and are looking for a film that is sure to be unlike any other you've seen, it's a worthwhile trip.

John Dies at the End review

Gory, weird and sometimes funny. If your not into exploding eyes, bugs or a self sacrificing dog, then this picture is definitely not for you. David Wong meets Arnie at a restaurant. He tries to narrate to Arnie the event that occurred before their encounter. Shelly Norris asks the assistance of David and John. David meets Roger North inside his car and is harassed by a detective. The visual effects were not that believable and impressive. Acting was amateurish and plot goes from here to there (literally and figuratively), without much clarity in the beginning, which makes you follow the story from the interview of Arnie of David. Soundtrack was nice and premise was unique. Don Coscarelli has glimpses of David Cronenberg's thought process, but lacks the vision and technical …

Movies I Want To See by elizabethmyu

No posts have been made on this movie yet. Be the first to start talking about John Dies at the End!