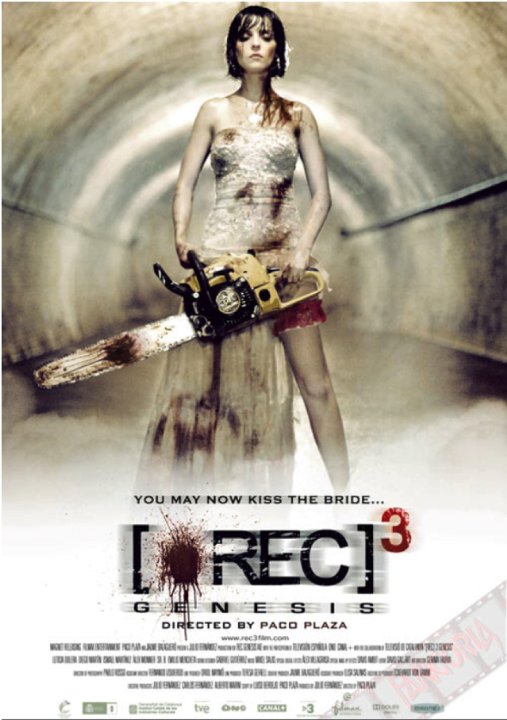 Plot: Part prequel, part sequel - REC 3 will show how the infection began, but also take the action far away from the claustrophobic apartment building to a wedding celebration, where things soon take a turn for the worst. -- Chris Kavan

Whereas the first two used a more found footage style, this is much more traditional horror setup. Unfortunately, it just isn't the right style - plus, trying to mix in the occasional comedic moment just falls flat. They try to keep up the religious element set up in the first two films, but it seems a tenuous link at best. If they make another, hopefully it follows the first two films and forgets about his one entirely.

Having never seen the first two [REC] films, I don't know how this one stacks up. I do know that this installment drops the 'found footage' style, which was a surprise considering most of the first act is filmed that way. There isn't much in terms of story/plot. It's essentially just people running here and there, being attacked by and/or killing infected. The directing and gore are okay, but the rest is flat, dumb and cliche.

oke well, i don't even know where to begin. First of all i thought the first two movies were good. They were exiting, thrilling and scared the crap out of me but this one was really disappointing. I thought this one was really boring. In the beginning i didn't even understand what it was about. Maybe i wasn't paying enough attention to it but it didn't got by attention like the first one did. I thought it was quite stupid how the men where dressed up like knight and were running around with swords and i din't like the ending. Why cut of the arm when she's already infected i mean that won't even help you one bit.

Hugely disappointing follow up to the classic original and the very good sequel, Rec 3 takes the series in a sorely misguided direction. Directed by one half of the original duo who brought us the first two, Paco Plaza seems to be the weaker half of the group. His ambitions are admirable, and the opening pre-credits sequence shows much promise and cleverness, but once it drops the found footage style of the first two installments it is all downhill from there. Trading true terror for campy Raimi-esque horror just completely backfires. I do hope that the final film in this saga returns to it's stylistic roots, because if the series ends on another sour note like this one did, it will be quite a tragic finale to what could have been a 1-2-3-4 punch to the horror genre. But I still …

No posts have been made on this movie yet. Be the first to start talking about [ REC ] 3 GÃ©nesis!