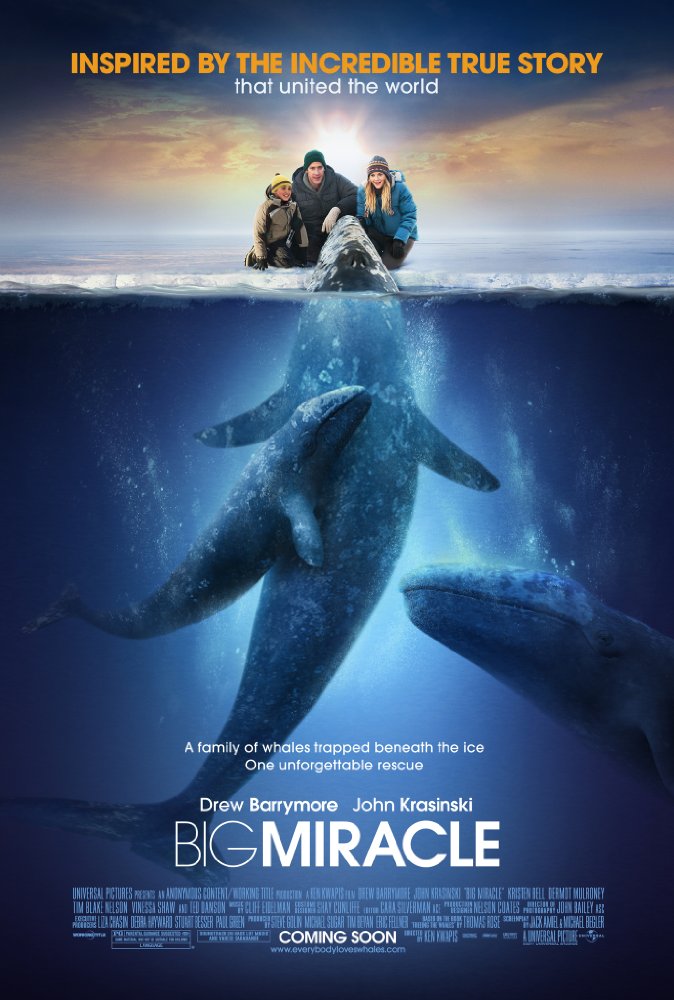 Plot: A small-town reporter manages to thaw relations between Cold War enemies the U.S. and U.S.S.R. when she reports on the plight of three California Grey Whales in the Arctic Circle. -- Chris Kavan

"Even though they're big and powerful, they're so much like us. We're vulnerable and we get scared. We need help sometimes too." A film worth viewing for its messages and shades of brilliance from Drew Barrymore. Soundtrack and direction was average but the screenplay was good.

Adam is a local journalist reporting from Arctic where he finds a family of three Grey Whales trapped on a thickening ice of the region. This instance in a way unite communities and re-unite with his girlfriend, Rachel, "the lady from Green Peace" *** I knew that this film would not name itself "Big Miracle" without something big in it. I was right and I really love the film. This may revolves around non-human creatures but the fact that this movie was able to capture the human emotions responding to non-human creatures, the film put itself to the list of good movies for this year. Love it!

It is 1988 and Adam Carlson (John Krasinski), a reporter for a small town dreams of making it big. While filming another lame story Adam discovers that a family of three gray whales has become trapped in a small hole in the Alaskan ice. He submits the footage to his station and it is soon picked up by NBC and goes viral. Soon every major network is sending reporters to cover the whale story. One of these reporters is Jill (Kristen Bell), whom Adam has had a crush on for some time.

Meanwhile Adam's ex-girlfriend, a Greenpeace animal loving activist, Rachel Kramer (Drew Barrymore) hears about the story and flies up there -- after berating Adam for not telling her himself and thus begins the rush to save the creatures (nicknamed "Fred," "Wilma" and "Bam-Bam").

No posts have been made on this movie yet. Be the first to start talking about Big Miracle!