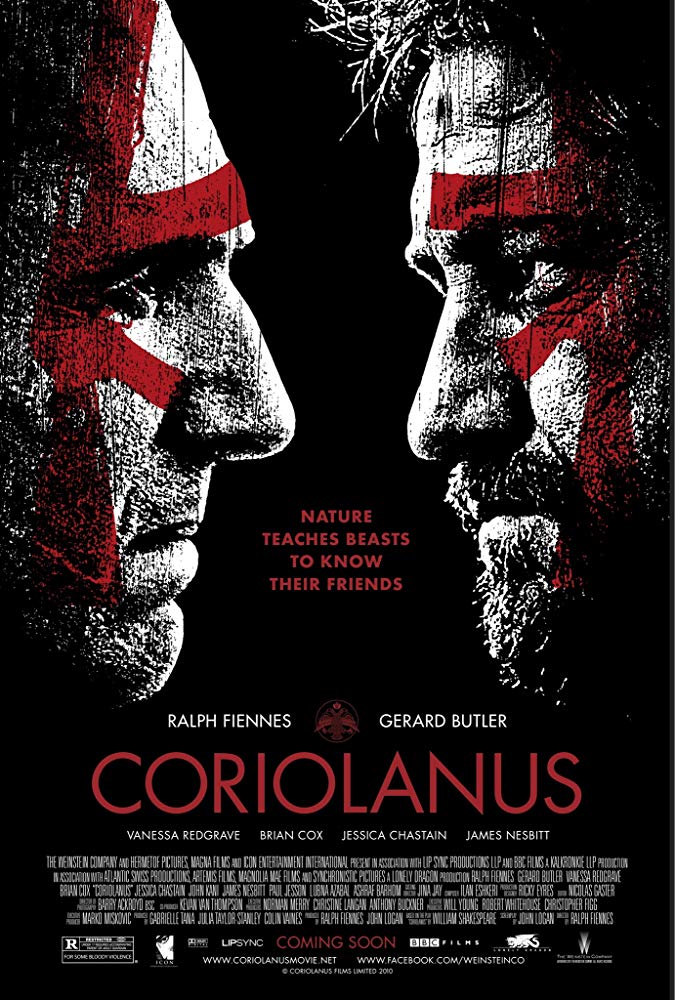 Plot: A disgraced hero joins forces with his hated enemy in order to destroy the city that betrayed him: Rome. -- Chris Kavan

Ralph Fiennes updates the Shakespeare play about a proud general (Fiennes) that plots vengeance against his home city for banishing him. His method? By siding with his own sworn enemy (Butler). Fiennes' direction is solid but he lessens the impact of the dialogue and drama with shaky cam and cramped staging. He is very good in the lead and captures the haughtiness of Coriolanus well. The themes feel as relevant today as they did in Shakespeare's era. The first half is more interesting than the second though. It seemed better paced.

Great performances by Finnes and Redgrave, but thatÂ´s it unless you really like Shakespeare.

Coriolanus is not for everyone, in fact many people will likely hate it. I can't say I particularly loved the film, but it features many admirable qualities nonetheless. The cinematography is really good. Although it borrows heavily from it's Shakespearean roots, making it hard to understand, the script and solid and the actors deliver it wonderfully. The performances are all top-notch, Vanessa Redgrave in particular is stunning; she steals every scene she's in. If you're a fan of Shakespeare you absolutely must see this, and if you're not, it is still a good film even though it wasn't my cup of tea.

Splendid performances with a sense of depth

Coriolanus is the directorial debut of Ralph Fiennes, who plays as Marcius Coriolanus. With the end of Harry potter series, it seems that Ralph Fiennes has entered to take a movie on his own hand. Without making any experimentation, he has chosen a tragedy drama written by William Shakespeare during the period 1608. With a powerful cast chosen in form of Gerard Butler, Jessica Chastain(wife) and Vanessa Redgrave(mother) to reprise their respective roles, Ralph has already emerged a winner. Considering the previous experience of Gerard, we might jump to a conclusion that he has lost the image of taking powerful roles since 300. The plot in here demands a much stronger role that might really help him from his previous failures. John Logan who is already much experienced in handling the …

No posts have been made on this movie yet. Be the first to start talking about Coriolanus!