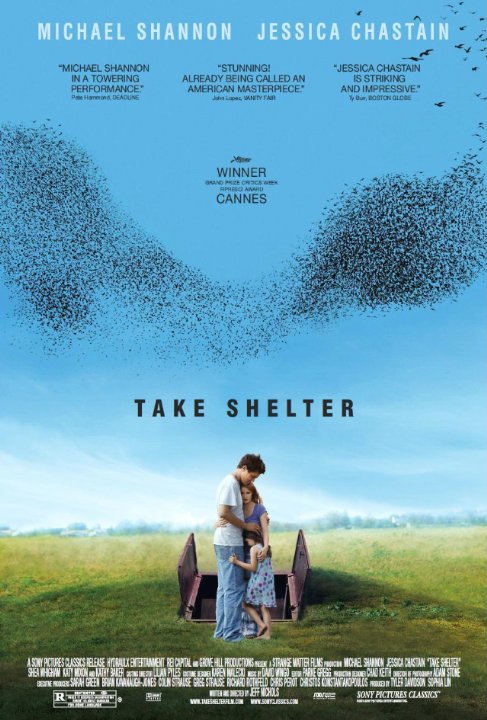 Plot: A man's vision of an upcoming disaster causes him to take drastic action by building a shelter in his backyard. Yet this comes at a price as his work and family life is thrown into disarray and his own sanity is called into question. -- Chris Kavan

The story is about a man as a vision of an upcoming disaster causes him to take drastic action by building a shelter in his backyard. Yet this comes at a price as his work and family life is thrown into disarray and his own sanity is called into question. This movie has a chilling and scary start and the ending made me go uh?. The acting is superb and the CG was not bad.

One of the best films of 2011. A brilliant film in every way. Michael Shannon and Jessica Chastain give Oscar caliber performances in this emotional drama. The last 30-40 minutes are the most intense I've ever seen. I absolutely loved it!

Fantastic drama that draws from many sources. The film, like it's main character, builds up quiet desperation and a feeling of unease that erupts with emotional healing. At it's core, there is a strong bond of family that most will relate to. Michael Shannon is just terrific. This truly is the best film of 2011 and I'm kicking myself for not seeing it sooner.

"It ain't always so easy." - Curtis (Michael Shannon). One of the most realistic pre-apocalyptic film (next to maybe The Road). This flick reminded me of a Donnie Darko without the humor and special effects. Curtis keeps seeing things awake and even during dreams. He lives with a supporting and understanding wife Samantha (Jessica Chastain) and their deaf daughter Hannah (Tova Stewart). Without the extraordinary acting of Michael Shannon, this would have not been possible. It composes of minute horror elements, post apocalyptic family drama and thought provoking screenplay. Direction was just sensational, screenplay effective, splendid cinematography and pace keeps you glued from start until the very big reveal. Surprising how the major awards bodies miss a hidden gem such as …

Take Shelter is a great movie. Writer/director Jeff Nichols magnificantly combines elements of horror, emotion, and family drama that makes for a compelling watch. Michael Shannon's brave performance carries the movie, and what he brings to his character feels dark and realistic. He does a magnificent job, and he truly should have been nominated for an Academy Award for best actor last year. The dream sequences and hallucinations are very intense and appropriately frightening, the cinematography is breath-taking, the characters are exceptionally developed and believable, the score is darkly fantastic, and the production is top-notch. The film gets a little bit slow in the middle section, but it builds to an unbelievable finale. This is the best film of 2011. Hands down.

Ordered it on Netflix, watched it, and was completely blown away by it. Michael Shannon is one hell of an actor, and in Take Shelter he delivers something powerful and daring. It was an amazing character-driven movie, with a lot of intense scenes, effective CGI, and a controversial ending that, honestly, stunned me. I loved the shit out of it, and I'm eagerly anticipating Jeff Nichols' future directorial efforts. It's&amp;nbsp;definitely&amp;nbs p;one of my favorite films of 2011, coming VERY close to &hellip;