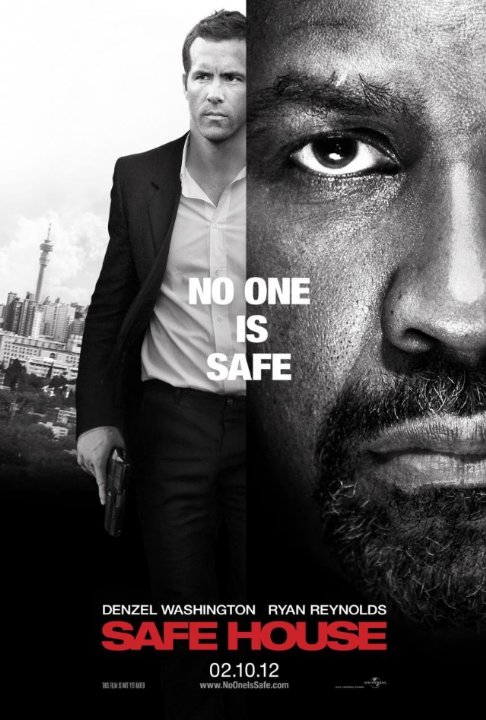 Plot: A house under the protection of the CIA becomes a target and it is up to the facility's house sitter to extract the criminal in hiding and take him to a secure location. -- Chris Kavan

The spy vs. spy plot is somewhat predictable (you can kind of anticipate most of twists from a mile away,) but the film's brutal action sequences are kinetic and the acting pairing of Reynolds and Washington holds a unique power that makes the movie better than its source material.

To keep it short: not I was hoping for. Lots of unrealistic action. Sometimes more drama than thriller / action movie. Oh, well it was better that watching footbal....

Safe House is about a house under the protection of the CIA becomes a target and it is up to the facility's house sitter to extract the criminal in hiding and take him to a secure location.

Let me start off with the goods: Denzel Washington in this movie nails it as the smart guy who will mess with you mind no matter what. I feel really sorry for Ryan Reynolds for being in movies that mostly bomb at the box office or him getting slammed by critics, but in this film he did a good job, but his character in the movie was really boring. Played the normal boring guy that the movie wants us to care about but you don't. Some of the action scenes where really well done, but some of the action scenes where shot poorly.

One of the best films of 2012 so far in my own honest opinion! This is my kind of film you know the one with a kickass trailer and then the movie is twice as good? Safe House is one of those films. Action packed right from the initial get go as Ryan Reynolds is working for the CIA as watch person (housekeeper in the film) for a safe house. Of coarse the very first guest of his safe house gets brought in during the middle of the night wearing a hood so he cannot know where he is. When the hood is removed it turns out to be CIA's most wanted fugitive Tobin Frost (Denzel Washington). Shortly after Frost gets brought there the safe house gets breached. We dont know who the men storming in are but we do know they all want Frost!! This leaves Mr. Reynolds in charge of getting this notorious …

Matt Weston (Ryan Reynolds) is a low-level CIA agent manning a seldom-used safe house in Cape Town. His life is boring and routine until they bring in one of the Agency's most wanted, rogue CIA agent Tobin Frost (Denzel Washington) to interrogate.

Frost however is the target of mercenaries, and when they attack the safe house, all hell breaks loose and Weston is forced to go on the run with Frost and figure out what the heck is going on in the grimy world of espionage and corruption.

I am so glad I took the chance to see Safe House. It was not what I expected at all, and it proved that Denzel Washington's Oscar win was not a fluke. It seemed to be a mix between Training Day and Bourne Identity with all the action and car chases. The camera shaking is a little too much to take at times, but I guess that adds to the realism of the situations such as the fight scenes. For a February movie, Safe House really went beyond my expectations and turned out to be a very entertaining &hellip;

I agree. Like I said, the trailer looks great. But the film's success hinges on that if you mentioned. I just find it strange that it's not going to be released this year for Oscar concideration, or wait until April or May. Post a review on Filmcrave when you see it. I've been burned by too many January-February fims in the past, so I'm a tad bit skeptical to see it the first few days it comes out.

If Denzel can channel the same spirit he could in American Gangster and Training Day, I don't care when the movie is released - it will be a worthwhile film.

The last time Denzel Washington played a character from the wrong side of the law, he won an Oscar for it. Ryan Reynolds made Sandra Bullock shine in &quot;The Proposal&quot;. The trailer looks great. The only thing that prevents me from getting too excited for the release of this film is the release date. Is the movie so bad that it is warranted a February release? I certainly hope not.