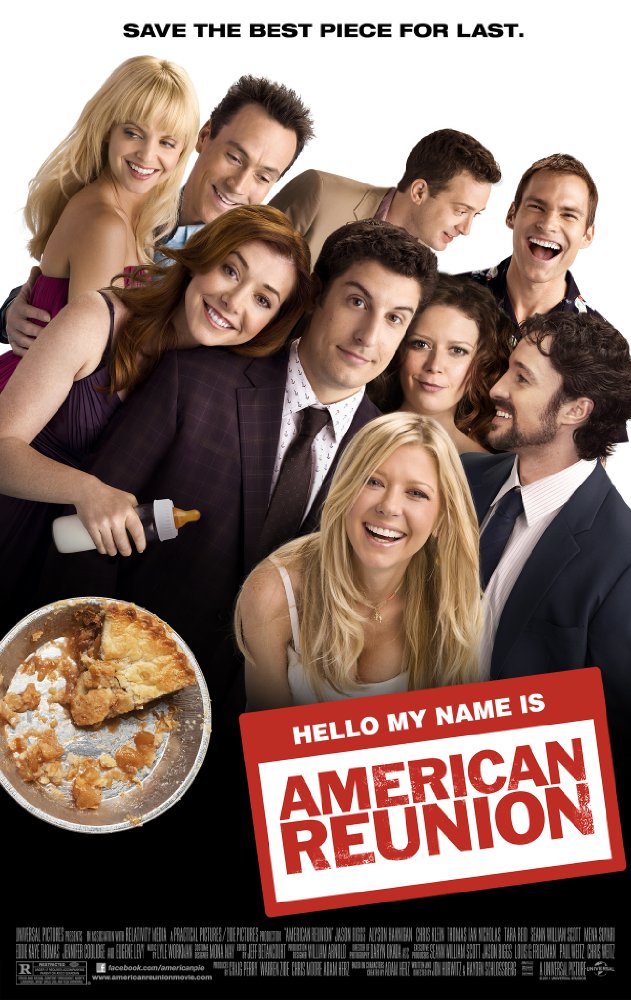 Plot: It's the 10-year class reunion and the old gang is back together again - happiness, wealth, love and Stifler's Mom - one thing is for sure, it's a reunion no one will forget. -- Chris Kavan

It was summer 1999 when four small-town Michigan boys began a quest to lose their virginity. In the years that have passed, Jim and Michelle married while Kevin and Vicky said goodbye. Oz and Heather grew apart, but Finch still longs for Stifler's mom. Now these lifelong friends have come home as adults to reminisce about-and get inspired by-the hormonal teens who launched a comedy legend. This movie was a good welcome back to the american pie cast. The movie did make me laugh and all so gross me out just like the other movies did.

I was nice to the see the cast back in action, but, man, all this movie did was make me feel kind of old (just like the characters). Although there are a few genuinely funny moments, for the most part it's still reliant on gross-out gags revolving around bodily fluids and sex. I've grown up - but this movie is the same old thing all over again.

After watching this I should just be grateful that I didn't pay to see this in the theater. This movie was a disappointment. I was so excited to see it, but after the first twenty minutes the whole thing turned into a ridiculous mess of situations that should not be happening. I love how these grown men have absolutely no control over the nonsensical situations they find themselves in. It was just frustrating and unconvincing. I thought this would be a nostalgic comedy, something like Grown Ups. But I was just watching grown men revert to being 17 year old boys again...dumb.

Time to move on..

Time has not been kind to the American Pie franchise.. The first one was excellent, the second one was not bad but lost alot of the first ones luster.. And then the 3rd and the frequent straight to home video versions which milked the franchise for all it was worth..

When the movie and redband trailer were announced I was generally excitied to see it.. But then I heard reviews of it and it made me less interested in seeing it.. I was still intrigued about seeing so I watched the DVD and I realized that much like my tastes have evolved this franchise hasn't..

Unfortunately they recycled alot of the material from previous films right down to the whole being upset at Stiffler and then finding a soft spot and accepting him again for who he is.. It just became one big cliche …

Jim Levenstein (Jason Biggs), Chris "Oz" Ostreicher (Chris Klein), Kevin Myers (Thomas Ian Nicholas), Paul Finch (Eddie Kaye Thomas), and Steve Stifler (Seann William Scott) get together at a high-school reunion. Jim has a kid with Michelle (Alyson Hannigan), Noah (Eugene Levy) is now a widower, Heather (Mena Suvari) and Vicky (Tara Reid) gets involved with their past. One of the best lines: "You can't bring back the past."

A few observations that makes one cringe were the following: Chris is still in love with Heather (what happened to communication), how 2 men in their 30's jump of the roof without any serious injury and that none of the three boys noticed Stifler dumping on their cool beverage. Soundtrack tailor fit the picture and the additional cast can be somewhat …

Nothing new here but enjoyable all the same!

The original gang Jason Biggs (Jim), Alyson Hannigan (Michelle), Sean William Scott (Stifler), Thomas Ian Nicholas (Kevin), Eddie Kaye Thomas (Finch), and even Chris Klein (Oz) has graduated from high school and are dealing with the pressures of work, marriage, parenthood, etc. So when John Cho's 'MILF' character organizes a Class of 1999 high-school reunion, the gang drop everything in their harried lives and head back to their hometown of Great Falls Mich. to relive their carefree high-school memories. Everybody including Tara Reid, Mena Suvari, Shannon Elizabeth, Natasha Lyonne and âThe Sherminatorâ (Chris Owen) put in an appearance, even if literally for a few seconds. There is just about enough crudity and adult humor you would expect in the series so the trip down memory lane …

No posts have been made on this movie yet. Be the first to start talking about American Reunion!