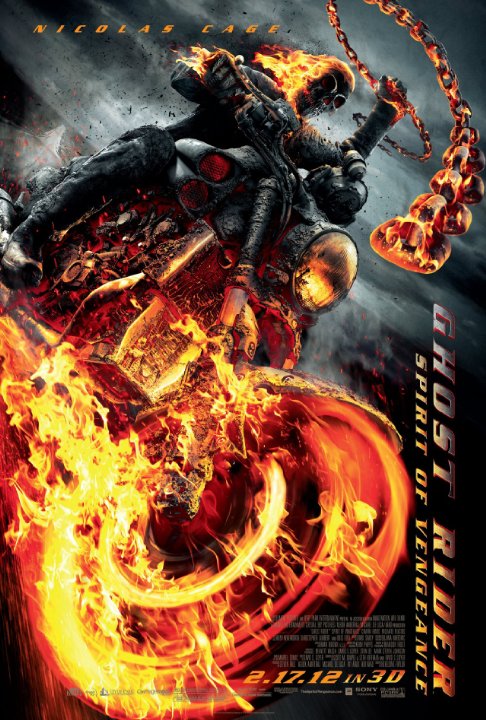 Plot: Johnny Blaze aka The Ghost Rider, must come out of hiding in Eastern Europe in order to stop the devil's plan to take human form. -- Chris Kavan

This year is getting hotter and hotter. The ghost rider himself look's scary in this film. But in the first movie the rider just look's like a cartoon, and I can say that this film is better then the first one.

Pace felt rushed, acting was laughable, poor character development for the kid and antagonists and plot ludicrous. Uninteresting from start to finish. It seems the style was emphasized more than the screenplay. Pure disappointment for a Marvel character. The feeling was like watching a video-game.

Good entertainment, perfect for an evening watching movie without using your head.

Over the top cinematic junk that can't be recycled

Neveldine/Taylor has proved before in Crank that action movies can be over the top. In Spirit of Vengeance they have once again proved that action can be over the top. The same kind of pattern where guns and launchers speak louder than dialogs and script is evidenced. Ghost rider 2 looks like a sub dued sequel that was looking for a story since 2007 when the first part came. Joining hands with screenwriters Scott gimple and Seth Hofmann is the famous David S Goyer (batman begins and the dark knight). Mr Goyer took up in writing the script part of the franchise. By the way he totally lost his name by creating this movie. When I consider the flow of the plot it was very weak. The scenes were not upto the mark and the total script is just the vengeance. But the title had given me that …

Marvel Side Characters by Snoogans

No posts have been made on this movie yet. Be the first to start talking about Ghost Rider: Spirit of Vengeance!