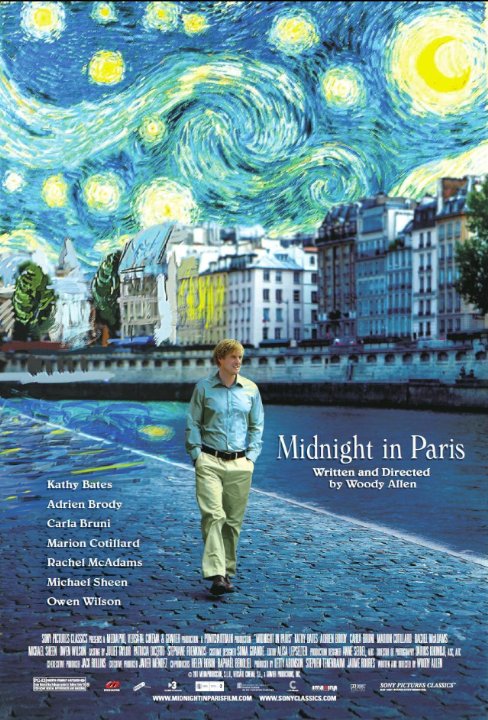 Plot: A family travels to Paris for business where the relationship of a young couple comes into focus when they are forced to look into a life beyond their own. -- Chris Kavan

Possibly Woody Allen's most thoughtful film in years, it's a familiar, but enjoyable collaboration of nostalgia and magical realism.

I am in love with this movie, I think if any other director had tried to make it, the story would have turned out cheap and contrite, but Woody Allen made it charming and wonderful. God, I loved it. The back cover synopsis on the DVD is hilarious though, it's so purposefully simple and straightforward and I can't really tell if this was done on purpose or not. I don't know, this is one of those movies I could watch over and over again in the dark and never get tired of it.

The story is about a family travels to Paris for business where the relationship of a young couple comes into focus when they are forced to look into a life beyond their own. This movie has one of the best writing of 2011 I mean it's so well written and the main character was so likable and you understand he version on pairs and every thing else.

I'm going to start off simple this time:
This is Woody Allen's best film to date.

It looks and sounds incredible. I can't use the word 'beautiful' enough to describe the way this film looks, sounds and feels at its core aesthetically.
It looks like something straight out of Allen's mind. Pulled out of a random day-dream and worked on to develop into a screenplay. The writing is superb, especially the dialogue and way of line delivery. It's a bit of a throwback to Annie Hall, but it's done much smoother and not with such forced intimacy as seen in Annie Hall.

Owen Wilson and Rachel McAdams are perfectly cast. Wilson even looks a bit like a young Woody Allen if you look at him from far away. Either way, he played the part convincingly. The look on his face when he realized he went …

If this movie doesn't make you want to up sticks and move to Paris instantly, you must be as dead as a cold dead fish that's been dead for a really, really long time. The beautiful imagery of the Parisian streets, lights, bridges, markets, monuments, cafes, bars and even the muddy Seine itself seem to explode with vibrancy and colour (especially in the rain). Owen Wilson plays Gil, a troubled and insecure writer trying to escape from the grind of rolling out formulaic Hollywood scripts so that he can use his writing talents in a more edifying way. His fiancÃ©e, Inez (played by Rachel McAdams), is not particularly supportive of his desired career change (nor of him in general it seems) and her 'one-dimensional' parents are openly dismissive of Gil and are generally the kind of people …

No posts have been made on this movie yet. Be the first to start talking about Midnight in Paris!