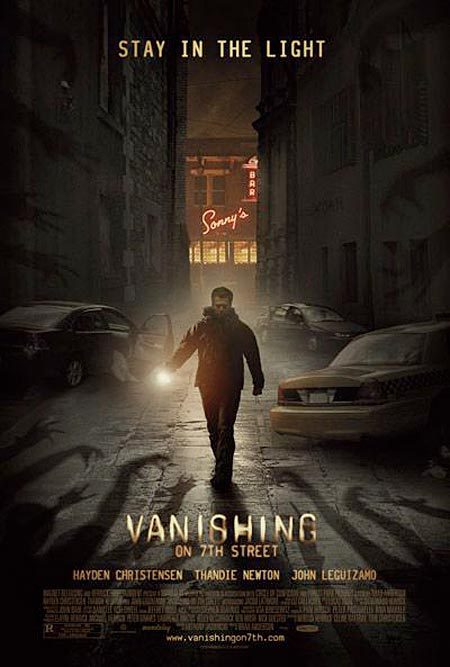 Plot: A power outage leaves Detroit in darkness, but when a group of individuals find themselves together it becomes something much more dangerous: everyone is gone, leaving clothes and vehicles behind. As the remaining light dwindles, the group finds themselves in a tavern, fending off the darkness with the little light they have left. -- Chris Kavan

One of the worst movies I've ever seen. Absolutely horrible!!! Waste of time to watch!! Do not watch this!! Terrible ending and too many questions left unanswered. Ridiculous!!!

So many questions left unanswered........ Who were the shadow people? Where did they come from? Why were they taking people & Where were they taking them? What was the point of it all? What did i just watch? Did I waste my time?

The concept was a bit intriguing but in the end the characters weren't that interesting so it pretty much cancelled out the story. So there you go - great story, boring characters. You decide if it's worth your time.

I recently revisited this film to determine how it is that something staring Hayden Christensen and John Leguizamo managed to get such an absurdly high rating from yours truly. The answer? Brad Anderson's direction and an extremely generous serving of biblical existentialism. The film's reference to both the Croatoan mystery, or the missing Roanoke Colony - which is now believed to not be so much a case of disappearing White settlers as an early, rare instance of cultural integration - and the Genesis myth (yes, Brad, I did notice all those apples on the road) merge in such an amazingly satisfying way that it could only have been unintentional for how clever it is. I am actually loathed to spoil it, but if you don't know what I'm talking about, pay attention to the race of Jacob …

now the only problem I had with this film was that it was very slow and boring at times.but one thing is for sure,it is one of the most powerful horror film i have ever seen.the actors in this are amazing,Hayden Christensen, thandie newton, john Leguizamo are spectacular in this film.the suspence keeps rising.now this is a small horror film,nothing too big happens.the special effects aren't mind blowing,but they sure are creepy.this film was good,a film that reminds us it's very rare to watch a horror film that actually deals with characters and their emotions.I recommend this film,truly memorizing.I haven't seen too many movies by Brad Anderson,but after watching this film,I now know this filmmaker is sure the real deal. I recommend this horror/drama.

Movies I have Watched Pt. 2 by Dmlarose

No posts have been made on this movie yet. Be the first to start talking about Vanishing on 7th Street!