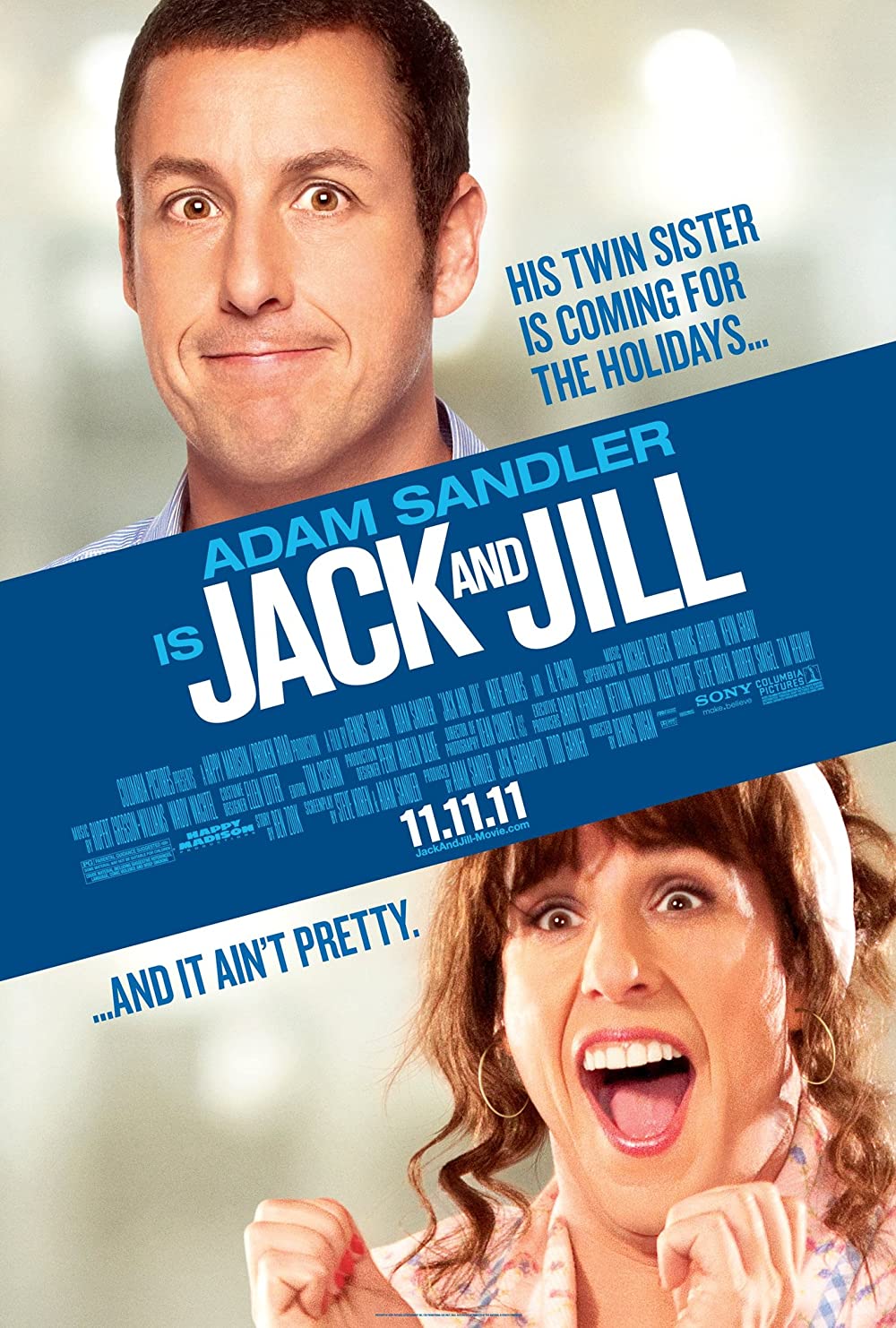 Plot: A family man living in Los Angeles has his hands full when his twin sister visits from The Bronx, then refuses to leave. -- Chris Kavan

Combine the worst parts of Sandler's "Zohan," "Little Nicky," and "Click," and you have "Jack and Jill."

goddamit this movie this is one of the worst movie of 2011 it is that Bad don't see this film go see chronicle go see the women in black go see the grey.

A disaster. This film is nothing more than a way for Adam Sandler to do a role that draws more attention to himself. Jack and Jill is one of the worst films I have ever seen. Sandler is obnoxious as Jill! His voice is whiny and he's not much better as Jack, making this film excruciating to watch because he's in every scene and the supporting characters are completely irrelevant. Oscar winner and 9 time Oscar nominee, Al Pacino, has a major (shameful) cameo role; he should sue Sandler for using him in this dog sh** film. Consider yourself warned!

So, since Grown Ups 2 is opening this weekend, I thought I'd take another look at the other Sandler-Dugan production that polluted my mind and made me dumber for having watched it.

I would like to start out this review by quoting the Nostalgia Critic:
'Reviewing a bad comedy is one of the hardest things to review, because there are only so many times you can say: That's not funny.'

That is completely true about Jack and Jill.
Adam Sandler, what happened? You used to make funny movies, even if they were stupid, they were funny guilty pleasures. And now, you've descended into what I like to call the Sandler-Dugan paradox, consisting of such comedic disasterpieces as You Don't Mess With the Zohan, Grown Ups, Just Go With It and of course this sucker. I call it a paradox, because …

Adam Sandler plays the successful advertising executive, Jack who only has a few weeks to get Al Pacino to do a Dunkin Donut commercial. He lives happily with his wife (Katie Holmes) and children but things take a turn for the worse when his lonely, stereotypical middle-aged Bronx Jewish twin sister Jill, also played by Sandler, comes to visit for Thanksgiving and stays longer than Jack wants.

Jack dreads every year when Jill comes up for a visit and so this time he tries to get rid of her by finding a man for her, but it proves difficult when Al becomes obsessed with Jill and want to date her and Jill doesn't even like Al.

There are many cameos including one of Johnny Depp wearing a Justin Beiber t-shirt at a L.A Lakers Game. Jack and Jill have its fair share of toilet humor, but …

Movie Review of Jack and Jill

Generally speaking, any movie where the lead male character also plays the part of a woman is a really bad idea. With the exception of âTootsieâ and âMrs. Doubtfireâ, I stand by this statement EMPHATICALLY. I donât think we need to look any further than the recent âMadeaâ phenomenon--which, by the way, I am at a loss to understand--to prove this point. And letâs now give Adam Sandler a warm welcome as we add him to the list of contenders in âJack and Jillâ.

THE GOOD: The movie starts out with some promise as we meet several sets of twins who share their feelings of growing up with a double entity, with some of the comments being laugh out loud memorable. Then we segway into meeting Jack (Adam Sandler), a big time ad executive living with his wife (Katie …

Worst Movies Ever by The Host

No posts have been made on this movie yet. Be the first to start talking about Jack and Jill!