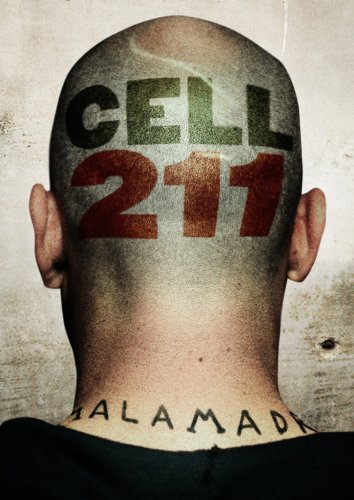 Plot: An expectant father with a beautiful young wife, takes a job as a guard at a maximum-security prison. Taking a tour of the facility prior to his first day, a riot ensues. Finding himself trapped in the prison under lock-down with no guards around, he is forced to portray himself as a new prisoner to avoid being killed as a prison guard. After making some smart decisions, he is taken under the wings of the rioters and prison gang leaders. He faces a race against time to settle the riot peacefully while trying to understand his place as he starts to align more with his new prisoners than the law.

Cell 211 is sadly one of those movies that would have been widely acclaimed and historic if it were an American made movie, but it also most likely would not have been as insanely good and capturing. This movie (best watched with subtitles if not a Spanish speaker) is one of the best foreign films I have seen to date. It had me gripping to my seat throughout. It is shocking, exciting, heartbreaking, maddening, and just absolutely crazy. This is in my Top 25 for must-see man movies because it was made for us.

Genuine, well-acted, skillfully directed and provocative. Juan Oliver accidentally gets injured. He is left inside cell 211. Malamadre is in charge of the prison break. Juanâs pregnant wife Elena gets concerned. Ulrilla fortuitously hurts Elena and Calzones finds out. One of the highlights of the movie was its screenplay with so many memorable lines: âWent a little far didn't you?â âTalking about it always helps.ââWe know what respect means.â âThis is no way to treat a human being.â âDonât believe the TV they always exaggerate.â âChildren change your life.â and âI donât want stuff. I want you.â The buildup of tension and suspense was spectacular, a few instances wherein the SWAT coming in and a missing walkie talkie. A particular flaw was letting a …

Must See Movies for Men by FSUNoles27TS

My Favorite Movies of All-Time (Full Order) by FSUNoles27TS

I want to post about this movie because it is a must-see movie for all movie lovers. It is absolutely amazing. Feel free to read my review on the movie. It might be hard to get a hold of, but it is well worth it. If made in the USA this movie would be critically acclaimed and most likely win many awards. An amazing film.