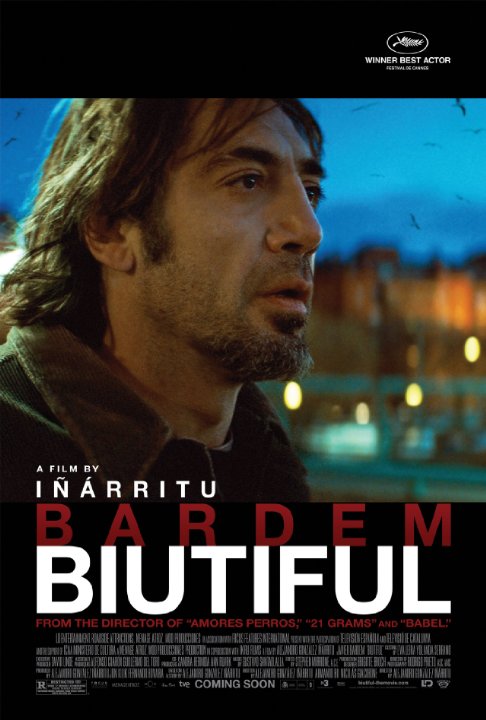 Plot: A black market dealer by the name of Uxbal also has the power to see spirits of the dead. He has no qualms about exploiting his fellow man, but when he learns that he has terminal cancer, he goes on his own quest to find someone to care for his children. -- Chris Kavan

Not as overwrought as 21 Grams nor as stupid as Blindness, but it's yet another gloom-fest from IÃ±Ã¡rritu. He used to be a DJ before taking to film - I imagine his record box being stuffed with Massive Attack and Portishead. You couldn't get much more downbeat than a man dying of cancer but to be fair it's given an original treatment. The performances of Javier Bardem and Maricel Alvarez make it worth watching.

I really don't get how everyone says this and Babel are IÃ±Ã¡rritu worst movies. I don't get it. This movie was so beautiful in every sense of the word. Sad, but real.

Can I just say how brilliant of an actor Javier Bardem is. It's nothing new, but it begs repeating, and here it absolutely dose. Without spoiling anything, but the scene between him and his daughter was one of the most moving and human things I've ever seen. It was hard to watch for the right reasons. Facial expressions alone with barley any dialogue spoken, you as an audience member feel and understand him without seeing the whole picture.

Biutiful is another fantastic movie from my favorite living …

This powerful, dark, brutal, and unrelentingly stark movie is so compelling and so thoughtfully filmed, you soon find yourself thoroughly immersed in the squalid events and surroundings of the characters' lives; a challenging existence played out in the midst of filth and crumbling buildings in an impoverished part of Barcelona, the home of Uxbal - played brilliantly by Javier Bardem. The continual pall of the shadows that darken his features, mirror the grim environment and nearly every scene is a landscape of shadow and gloom; a claustrophobic and desperate existence that inexorably crushes Uxbal and his family. The endless rain and clouds perfectly reflect the bleakness that is Uxbal's life; entrenchment in an inescapable cycle of poverty, hardship, and/or exploitation. This …

Javier Bardem stars as Uxbal, a conflicted man who struggles to reconcile fatherhood, love, spirituality, crime, guilt and mortality amidst the dangerous underworld of modern Barcelona. His earns his livelihood by helping smugglers and illegal aliens, by selling knock-off goods, and as a spiritual advisor to his neighbors (he's able to talk with the dead). The film follows him as navigates the shoals of the Spanish underclass, deals with an unfaithful wife (who's having an affair with his brother) and impending death, all the while juggling the internal conflict of good and bad and letting it be known that the most important thing in the world is his children -- and the love he passes on to them. Alejandro Gonzalez Inarritu's films are not noted for their uplifting themes ("21 Grams," …

My Foreign Films by Carol without an e

No posts have been made on this movie yet. Be the first to start talking about Biutiful!